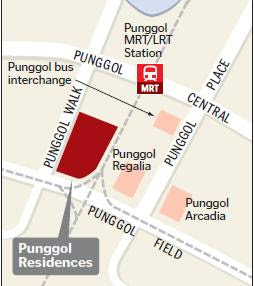 THE Housing Board has launched a premium project offering 769 new flats in Punggol in a bid to build up critical mass in the estate.

The new project, called Punggol Residences, offers 615 four-roomers and 154 five-room flats in a central location just five minutes from Punggol MRT station.
HDB is launching the project under its build-to-order (BTO) scheme - flats are built only when certain demand is reached.

It has so far offered about 6,500 new flats in Punggol since it unveiled grand plans for the former fishing village to become the only waterfront public housing project in August 2007.
This is in line with the board's commitment to build up the population in the estate to attract and support new facilities, it said.

PropNex chief executive Mohamed Ismail said that, despite the higher prices, resale flats might still be more attractive given that buyers can enjoy a CPF housing grant of up to $80,000 depending on their income, and do not have to wait three years for new flats to be built.
On the other hand, buying new flats direct from HDB will attract those who prefer not to fork out any cash for resale flats.

This amount, known as cash-over-valuation, has started creeping up for premium resale flats in Punggol to about $15,000 to $20,000, noted Mr Ismail.
As of 5pm yesterday - the latest update from HDB - 593 applications for the 769 flats have been received.

Applications for the new flats can be submitted online at HDB's website www.hdb.gov.sg until Aug 12.