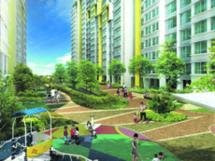 Day One of latest BTO sees strong demand; new flat supply totals 6,500
WHEN the original Punggol 21 vision was unveiled 13 years ago, enthusiasts who bought homes in the sleepy estate became disillusioned when the model waterfront living failed to materialised and facilities were slow to appear.

But then the dream was revived with a bang two years ago - and since then, interest has been strong, with recent HDB Build-To-Order (BTO) projects seeing robust demand.

"The main draw is that the flats are affordable and (fairly) new," said its Asia-Pacific associate director, Eugene Lim.

He noted that five-room flats in the estate were "struggling" with a selling price of $300,000 before Prime Minister Lee Hsien Loong's announcement of the Punggol 21+ plan in 2007.

Now, those flats "easily" sell for $400,000 each, said Mr Lim. But even so, they are easier on the pocket than flats in mature estates.

Much of the demand for Punggol resale flats is from permanent residents (PR), making up 40 per cent of PropNex's sales in the estate, said chief executive Mohamed Ismail. "PRs don't mind its (far-flung) location and they realise the benefits of a new estate," he told Today. "They also don't have any emotional attachment to mature estates, unlike Singaporeans."

Not far from resale prices

But with the Government pushing out new flats in Punggol, would this put a downward pressure on resale flat prices in the area?

The supply at Punggol Residences launched yesterday brings total new flat supply in the estate to 6,500 since the unveiling of estate revitalisation plans in Aug 2007.

Property agents do not seem to think so, as BTO projects are targeted at first-time flat-buyers who can wait a few years for completion. Many who buy resale flats are looking to move in within three to four months.

If market anticipation of the Punggol 21+ concept is anything to go by, prices are expected to remain steady, the analysts told Today.

"Punggol is basically a blank sheet of paper, it doesn't have the clutter of mature estates so there's a lot of scope for planners and Government to do many things as they bring about the waterways and so on," said ERA's Mr Lim. "I am sure it will be a very happening place in the future."

Punggol resident Faith Toh is holding out hope for that vision. She and her husband bought into the original Punggol 21 idea when they shelled out for their executive flat seven years ago.

Launched in 1996 by then Prime Minister Goh Chok Tong, Punggol was to have been a model waterfront town with modern amenities such as watersport centres, clubs and libraries. But the 1997 Asian Financial Crisis and construction industry problems in 2003 put a crimp on plans.

"We thought when it becomes like East Coast or Tampines, it'll be like living in town without having to go downtown," said Ms Toh. Even now, she said, going home to Punggol's "pretty" landscaping "feels like you're staying in a resort".
Source: Today, 31 July 2009
Posted by About Singapore Property