Frasers Centrepoint outsells them all 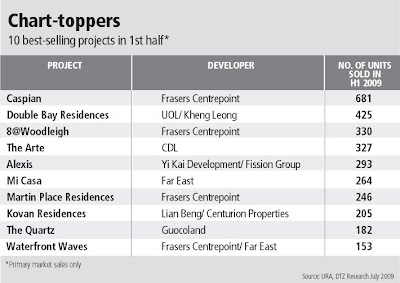 With 1,423 private homes sold in H1, it is far ahead of all other developers

(SINGAPORE) Frasers Centrepoint sold a total of 1,423 private homes in the first six months of this year - many more than any other developer, according to DTZ's analysis of the latest official data of developers' housing sales released by the Urban Redevelopment Authority (URA) last week.
Frasers Centrepoint thus had a 19.3 per cent share of the total 7,374 homes developers sold in H1 2009.
Property bigwig Ng Teng Fong's Far East Organization was in second position, with 556 units sold for a 7.5 per cent share, followed by Hong Leong Group (including City Developments) with 524 units, translating to a 7.1 per cent share.
UOL Group and Kheng Leong (a private vehicle of the Wee Cho Yaw family) sold a combined 509 units.
DTZ also used URA's data on developer sales to compile a list of the top 10 selling projects in the primary market in first-half 2009. Frasers Centrepoint's Caspian near Jurong Lake ranked tops, with 681 units sold. The preview of this 99-year-leasehold project in February was the first major property launch here after Lehman Brothers' collapse last year, and its carefully researched average price of $580 per square foot (psf) helped to draw out pent-up demand, sparking a revival in home sales. Since February, developers have sold more than 1,000 private homes each month, culminating in a whopping 1,825 units transacted in June.
The second most popular project in H1 2009 was UOL Group's Double Bay Residences in Simei (425 units), followed by Frasers Centrepoint's 8@Woodleigh (330 units).
City Developments achieved sales of 327 units at The Arte in the Balestier area, while Yi Kai Development and Fission Group found buyers for all 293 units at their Alexis project at Alexandra Road. The Mi Casa condo in Choa Chu Kang (264 units), Martin Place Residences (246 units) and Kovan Residences (205 units) were also among the most popular projects in the January- to-June 2009 period. The Quartz in Buangkok and Waterfront Waves (a condo near Bedok Reservoir being jointly developed by Far East and Frasers Centrepoint) completed the list of most popular private residential projects in H1.
DTZ's head of Southeast Asia research Chua Chor Hoon observed that mass-market and some mid-tier projects hogged the limelight in H1. 'The sales momentum this year started with the upgrader segment, and it was only more recently that it has filtered to the mid-market,' she noted. She reckons H2 2009 could see more sales of mid and upper-mid projects as the ongoing recovery continues to travel up.
Agreeing, Knight Frank executive director Peter Ow reckons that mid-end projects with average prices ranging from $1,200 to $2,000 psf will dominate sales in the current half, followed by mass-market projects catering to HDB upgraders, and lastly, high-end projects.
'The bulk of the mass-market projects have been pushed out by developers and demand is filtering up to the mid segment. Developers are also releasing quite a number of projects in the mid-price range,' he added.
He argues that whereas the recovery in the mass market and mid sectors has been led by locals, any significant boost in demand for upmarket homes has to be steered by foreigners. The earliest this can take place will be in Q4 2009.
The fate of Singapore's high-end residential sector hinges a lot on the performance of Asia-Pacific economies since homebuyers in this segment have traditionally come from the region.
The opening of the two integrated resorts (IRs) will also help support rental demand for residential properties in Singapore as expatriates and foreigners employed in the IRs seek accommodation in the low to mid sectors. 'Of course, as the high-rollers come to town, Singapore's branding will strengthen,' according to Mr Ow.
DTZ's Ms Chua expects developers this year to sell more than the 11,147 units they transacted in 2006 and possibly touch the record of 14,811 units set in 2007.
DMG & Partners Securities' analyst Brandon Lee reckons residential property prices bottomed in Q1 2009. He forecasts overall private residential capital values will recover 8 per cent for the whole of this year, and rise a further 17 per cent next year. The increases will be led by the prime segment.
'We expect the pick-up in domestic buying activity and comfortable price differential between the mid and prime segments to attract more foreign buyers in the next six to nine months,' he suggests.
Source: Business Times, 21 July 2009
Posted by About Singapore Property