Home-hunters back on the prowl again 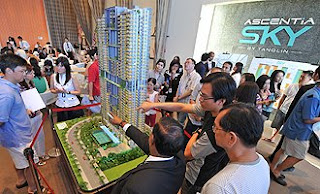 Current fizz setting new price benchmarks for property in some suburban areas
Over the past month, Madam Y.M. Chung visited eight showflats in search of the perfect apartment to buy.

She had seen property prices sliding since the financial crisis hit last year and, as she had extra cash, parking it in property seemed like a smart move.

'It's so hard to say if prices will go up or down so now is as good a time as any to buy,' said the 43-year-old retail sales assistant, who is married to a factory manager.

Yesterday, the mother of two teenagers bought a two-bedroom apartment in Far East Organization's Waterfront Key project in Bedok Reservoir for more than $700,000.

She hopes to earn good rental income when the condo is completed, and is prepared to sell her five-room Sengkang HDB flat and move in if that does not happen.

Madam Chung was one of 45 people who bought units at the development's official launch yesterday. So far, 173 of the 278 units released at the 437-unit project, which previewed a week ago, have been sold. The average price: $735 per sq ft (psf).

Elsewhere, home-hunters were also on the prowl. More than 1,000 thronged Wing Tai's Ascentia Sky showflats in Redhill when the 373-unit condo was launched yesterday. It has sold 85 per cent of the 120 units put up, at prices of around $1,300 psf.

The two launches yesterday follow in the wake of other successful ones in recent weeks.

The country may be in a recession but Urban Redevelopment Authority (URA) figures tell a different story. About 1,825 new homes were sold last month, up from 1,673 in May and 1,216 in April.

It is a phenomenon that has baffled property consultants and surprised developers.

'Singapore is probably the only place on earth where there is a recession and unemployment but the property market is still so hot,' said Mr Eugene Lim, associate director of property firm ERA Asia Pacific.

But reasons behind the shopping spree are not hard to find. They range from low interest rates, lower prices and a fear of missing the bottom to cash-rich buyers and optimism that the economy will bounce back soon.

'Instead of putting their money in the bank for a measly interest rate, some investors prefer to buy properties to hedge against inflation,' said Ms Chua Chor Hoon, head of research at DTZ South-east Asia.

People such as those who have profited from collective sales and who may not have bought a replacement property, or who had bought HDB flats and still have excess cash to invest, are also among current home shoppers, said Ms Chua.

Developers have been cautious not to jack up prices too quickly, but have been inching them up so they do not scare buyers off.

Statistics released by the URA last Friday show that prices of private residential property fell by 4.7 per cent in the second quarter of this year, less than earlier estimates had indicated. The previous quarter registered a fall of 14.1 per cent.

The newspapers are now full of advertisements touting launches of projects, both new and old. Sales of some projects had been put on hold after last year's financial crash.

Far East Organization, for instance, resumed sales of its Silversea condo in Amber Road and has sold 57 of the 80 units released since July 10. Prices range from $1,200 to $1,700 psf.

It has also sold 80 per cent of the 182 units released at Vista Residences in Thomson, with prices from $1,100 psf.

The current fizz is setting new price benchmarks in suburbia, with the upcoming Centro Residences, next to AMK Hub, tipped to cross the $1,000 psf mark.

Another condo, Optima in Tanah Merah, which will preview at month's end, will be sold at around $900 psf. Its developer, TID, said it has had more than 1,000 inquiries.

Analysts said such pricing is not unreasonable, given that these developments are next to MRT stations and suburban hubs.

Who is plonking down money for units?

Analysts said buyers are largely investors taking a medium-term view and home-seekers such as HDB upgraders.

Those who buy suburban units are usually owner-occupiers who could be HDB upgraders or parents buying for their children.

The price gap between non-prime residential projects and HDB resale flats has narrowed from the peak in 2007.

Said Dr Chua Yang Liang, head of research at Jones Lang LaSalle: 'As long as this gap remains tight, this stream of HDB upgraders into the private residential market is likely to continue.'

Foreign buyers are also back.

Jones Lang LaSalle's head of residential, Ms Jacqueline Wong, said buyers from India, Hong Kong, Indonesia and Europe have returned in the past few months with requests to source for properties in the prime areas.

The high-end market has seen some stirring of interest.

A unit in Ritz-Carlton Residences was recently sold at $3,404 psf, while seven units at The Orchard Residences were picked up at between $2,700 and $3,299 psf.

Mr Li of CBRE Research predicts that if the sales momentum continues, total transaction for homes for the entire year could hit as high as 14,000 - close to 2007's record 14,811.

'This, in turn, spells the possibility of an upturn in home prices in the second half of the year,' he said.

But with launch after launch every week, analysts also warn buyers not to overstretch themselves or get swept up by the fever.

Said Ms Chua: 'There is a danger that some may be swayed into buying when they see others buying, thinking that prices will increase and they can make quick profits.'

There is also the proposed new tax law which could be introduced in January, where a home owner is taxed on his profit if he sells a second property within four years of purchase.

Property may not always be a win-win investment either.

'It depends on timing of the purchase, length of holding it and the property that is purchased,' said Ms Chua.

During the 2007 bull run, prices did not reach 1996 levels for many properties outside the prime districts.

How long this current buoyancy will last will depend on when the economy recovers and how strong that will be, said analysts.

But for the moment, it does look like the showflats will continue to be jam-packed with people each week.