THE Woodlands coast took its most significant step yet in its transformation from sleepy industrial area to bustling waterfront promenade yesterday.

Once occupied by warehouses, the waterfront now boasts a modern park with highlights such as a 400m-long jetty - the longest in Singapore - and a playground equipped with a two-storey-high 'sky walk'.

Over 2,500 residents joined Sembawang GRC MP and Senior Parliamentary Secretary for Manpower and Health Hawazi Daipi yesterday for the phase one opening of the Woodlands Waterfront. 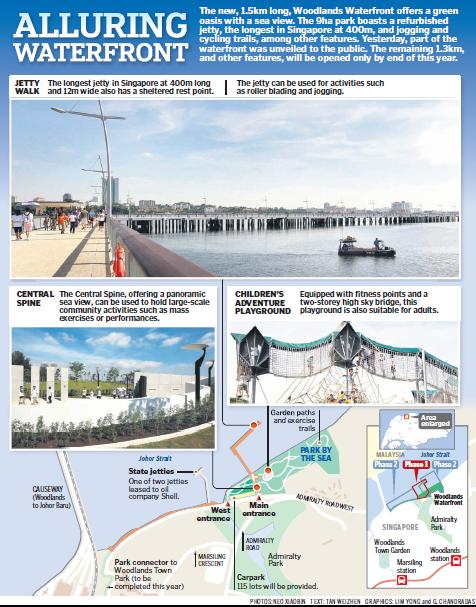 Phase two of the $19 million, 9ha park - which will feature, among other things, nature trails and a 700m promenade which will hang over the sea - will be opened only by the end of the year.

When fully completed, the 1.5km Woodlands promenade will form a significant part of the Urban Redevelopment Authority's (URA's) plan to link the north region's green spaces with park connectors, which by 2015, will stretch to 90km. Currently, the region has 19km of park connectors. URA's national objective is to build a 150km round island route, which will allow residents to walk, cycle or jog around Singapore.

Feedback played a crucial role in designing the Woodlands Waterfront, which offers a green oasis for residents to play, exercise or gather for activities, while enjoying the sea view. Ultimately, the final concept was a marriage of all that the stakeholders - residents, grassroot leaders and designers - wanted.

Features that are accessible now include a large event space called Central Spine, where residents can hold community activities, and Singapore's longest jetty.

The jetty, which dates back to the 1920s, has been refurbished and offers a close-up view of Johor Baru.

Jogging, cycling trails and rest areas weave through the promenade, together with a playground featuring a two- storey-high 'sky walk', a mesh bridge which people can climb up and across.

Residents who braved the scorching sun yesterday to enjoy the facilities were rewarded by the great sea view that the new waterfront offers.

Ms Wong Bee Ling, 39, who was there with her husband and children, was delighted with the facilities, especially the children's playground and the jetty.

'I'm pleasantly surprised, I didn't realise there was this spot in Woodlands. The view is nice and I'll be sure to come again in the future,' said the shipping executive, who lives in Woodlands.

'It will bring the scenic northern coastline closer to people and offer more recreational choices.'


Source: Straits Times, 24 May 2010
Posted by About Singapore Property