PROPERTY experts are split over whether the market can absorb the Government's largest-ever land release, to be rolled out in the second half of this year.

They agree that the flurry of new sites released will dampen red-hot bids from developers and will eventually mean more reasonable mass market prices.

Some warn of a potential supply glut later on but others say the location of many sites in mature HDB estates means a strong take-up by upgraders. 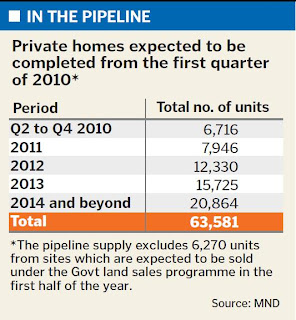 Last Friday, the National Development Ministry said it will place 18 sites for residential use on the confirmed list for tender on a schedule from July to November.

A further 13 sites will go on the reserve list, which means they go up for sale if at least one developer commits to a minimum bid acceptable to the Government.

In all, these 31 sites - of which 20 are new and not rolled over from the previous land sales programme - can accommodate a record 13,905 units.

The confirmed list sites alone - including five executive condo sites - will yield 8,135 units, which could be up for sale within seven to 12 months of the land purchase.

'It will create a potential supply glut because if you look at sales since early 2009, I am not sure if they are sustainable,' said one analyst, declining to be named. 'Prices may moderate or come down and that will be evident when we have completions of the properties.'

'This competition, coupled with a resilient HDB market and improving economic fundamentals, could lead to further rises in mass market prices (already at record highs) if new supply is not introduced,' he said. 'Quantum-wise, the confirmed list sites seem like a lot but if you look closely at the sites offered, a lot of them are in established HDB estates and would appeal to HDB upgraders.'

Still, Ngee Ann Polytechnic real estate lecturer Nicholas Mak said units to be built on land 'sold this year will likely not be absorbed in a single year. Developers will have to space out the launches over a longer period'. He said land for at least 14,400 units will be sold this year, far higher than average annual sales over the past decade of about 8,700 units.

He said the Government is taking a 'pre-emptive measure' to alert the market that there will be no supply shortage in coming months, with no need to bid aggressively for land or rush to buy units.

'This has the effect of calming the 'fear of losing' and distributes demand more evenly over time.'

Dr Chua said supply is not short and with more housing to be injected into the market, 'if economic factors turn unfavourable (which has a low probability), we could end up in a supply glut in about two to four years' time when the supply is physically ready for occupation'.

He added: 'Demand-side measures are probably more effective should transaction volumes and prices begin to outpace the general economic recovery.'

A property expert, who declined to be named, said: 'Buyers won't be in a hurry. Sales will slow. Once sales slow, prices may fall.' Prices of new suburban launches may come back to a more sustainable level of $800 psf, he said.

Still, given that sentiment has weakened, releasing so much supply could be risky. It may take another cycle to correct the market, he added.

On the other hand, said a developer: 'I would rather they increase supply than come out with a demand measure. The glut may not happen if the buyers are big developers and are thus able to hold if needed.'

Experts say leasing demand will be a key factor determining whether the mass market can absorb all the new supply.

' If the Government continues to be aggressive in its immigration policy, the supply may still be comfortably absorbed,' said Colliers International's research and advisory director, Ms Tay Huey Ying.

The full market impact will be clear when these projects are completed in at least 31/2 years, she said.

Source: Straits Times, 25 May 2010
Posted by About Singapore Property