MCL Land trumped six other developers with its top bid of $207.5 million for a 99-year leasehold residential site at Hougang Avenue 2.

The price works out to $456 per square foot per plot ratio (psf ppr) - higher than analysts' estimates of $310-350 psf ppr when the site was first triggered more than a month ago. In fact, all seven bids came in above that estimated range at the close of the state tender yesterday.

'While the number of bids, at seven, are within expectations, the bid prices are fairly bullish,' noted CBRE Research's executive director Li Hiaw Ho. 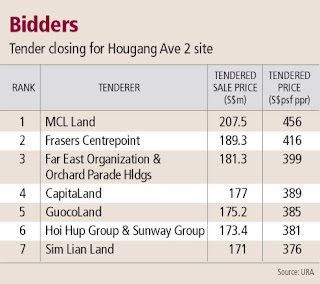 MCL Land said that if it is awarded the site, it will build a project with around 450-500 units. Most of the units will be one and two-bedroom apartments as well as smaller three-bedders, the company said. The project will be launched in 9-12 months' time.

MCL Land's bid was 10 per cent higher than the second highest bid of $189.3 million, or $416 psf ppr, from Frasers Centrepoint. The top bid was also 21 per cent higher than the lowest bid of $171 million, or $376 psf ppr, put in by Sim Lian Land. Analysts said that MCL Land might have been especially bullish as it is the developer's sixth attempt in a government land sale tender since last year.

'It has been unsuccessful in the previous five land tenders, which may explain why it is more aggressive in this tender, bidding 10 per cent higher than the second highest bidder,' said Ngee Ann Polytechnic real estate lecturer Nicholas Mak.

The plot was launched for sale after it was triggered by an unnamed developer who agreed to bid at least $109.9 million ($241 psf ppr) for it in April.

The site is located at the junction of Hougang Avenue 2 and Yio Chu Kang Road and surrounded by mostly landed homes.

CBRE's data showed that units in recently launched new freehold apartment projects in the vicinity such as the 50-unit D'Pavilion, 81-unit Residences Botanique and 33-unit Wembly Residences were sold at average prices of $930 psf, $1,000 psf and $870 psf respectively between January and April 2010. And units in the 99-year leasehold Kovan Residences went for an average of $900 over the same period