The Republic has bumped up both trade and export growth forecasts for the year by five points each, following Q1's strong export rebound.

Total trade is now expected to grow 14 to 16 per cent this year, up from the previous forecast of 9 to 11 per cent. And the non-oil domestic exports (NODX) growth forecast has also been raised to 15 to 17 per cent, up from 10 to 12 per cent previously, International Enterprise (IE) Singapore said yesterday.

The trade agency attributed this rosier trade outlook to strong export growth and domestic demand from Singapore's key Asian trade partners, as well as a quicker than expected rebound in global trade. World export volumes are expected to rise 9.5 per cent this year, after falling 12 per cent in 2009, the World Trade Organisation says. 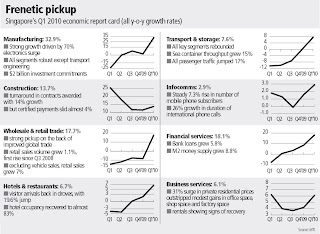 And, firmer consumer spending in the US will boost trade volumes too, as the bulk of Singapore's exports end up with consumers in developed markets like the US, IE Singapore added.

In the first quarter, Singapore's total exports and imports rose 27 per cent from a year ago to hit S$210 billion. NODX rose 23 per cent year-on-year, with electronic shipments soaring 30 per cent with increased exports of integrated circuits, their parts and parts of PCs. Non-electronic exports, such as petrochemicals, specialised machinery and primary chemicals, rose 20 per cent too.

Demand for Singapore's exports rose in all of its top ten NODX markets in Q1. Shipments to Hong Kong, Taiwan and Indonesia contributed most to the rise, while EU, China and US remained Singapore's top three NODX markets.

In a separate report, Ministry of Trade and Industry economists said that the mix of Singapore's exports has not been altered much by the global recession, but certain export markets have gained prominence over others.

Last year, Hong Kong climbed two rungs from 2007 to take the spot of the US - which fell to fifth place - as the second largest market for Singapore's domestic exports (oil and non-oil) after the European Union. 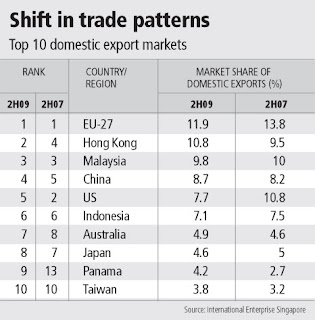 But the changes between 2007 and 2009 also reflect longer-term shifts in Singapore's exports away from the G3 economies to China, Asean and India, the MTI economists said.