THE worst year on record for the Singapore economy, post-Independence, it turns out, is not 2001 or even 2009 but 1998 - when GDP sank 2.1 per cent during the Asian financial crisis.

Following a recent updating of the national accounts from a 2000 base year to 2005, it emerges that the financial service slump during the 1998 crisis was worse than previously estimated, resulting in a downgrade in the year's GDP growth from the earlier estimate of minus 1.4 per cent. The 1998 recession is now Singapore's worst post-1965 - and second only to the 1964 downturn when GDP fell 3.7 per cent. 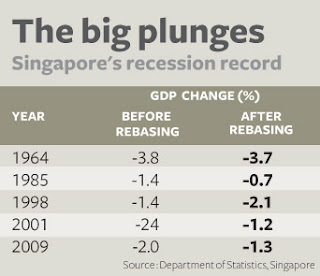 Singapore's economic history - or at least its GDP growth record - has been rewritten somewhat with the Department of Statistics' (DOS) latest rebasing exercise, which also includes some changes in the conceptual treatment and measurement of financial services output.

Previously, GDP contraction in 2001 - an eventful year that saw the bursting of the dotcom bubble and the Sept 11 attacks in America - was reported at 2.4 per cent, a slump surpassed only by the 1964 record of minus 3.8 per cent (before rebasing).

The revised figures now show that the catastrophes of 2001 apparently had a smaller impact on the Singapore economy - GDP fell 'just' 1.2 per cent in 2001. That's even a tad better than 2009's revised 1.3 per cent contraction amid the global economic meltdown, which was earlier recorded at 2 per cent.

In all, 1998 to 2001 saw GDP growth revisions of up to 1.2 percentage points, 'reflecting the considerable economic volatility over the period', says DOS in a paper on the rebasing exercise.

While the annual growth figures date back to 1960, collation of quarterly numbers started only in 1975. And, reflecting the increased economic volatility in recent years, the all-time quarterly peaks and troughs to date (since 1975) all occurred within the last two years.

In year-on-year terms, Q1 2009 saw the sharpest contraction on record of 8.9 per cent. On a seasonally adjusted, annual basis, the deepest slump quarter-on-quarter was 12.5 per cent in Q2 2008. As for the highs, the recent Q1 just past clinched both, with its 15.5 per cent year-on-year pace and 38.6 per cent sequential surge.

Overall, the revisions in real annual GDP growth are relatively moderate - under one percentage point - for each of the last five years.

With the rebasing, the nominal value estimates for construction, financial services and business services have been revised down. But this is more than offset by upward adjustments in the other sectors - manufacturing, wholesale and retail trade, transport and storage, information and communications, and other services.

In nominal terms, manufacturing now accounts for close to 20 per cent of the economy, with the wholesale/retail trade second with a near-18 per cent share. Business services' slice of the pie is about 14 per cent, and financial services, 12 per cent.

Source: Business Times, 22 May 2010
Posted by About Singapore Property