THE private home market stayed firm in the first quarter of the year, with transaction volumes on the rise and more expensive units changing hands.

According to property consultant DTZ's analysis of caveats lodged, 8,159 private residences were sold in Q1, up 22 per cent from the previous quarter and more than double the number a year ago.

More homes were bought by those with private addresses. HDB upgraders accounted for 34 per cent of all transactions in Q1, taking the same share as they did in Q4 last year. 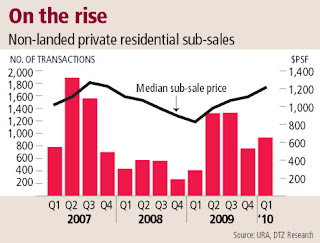 When the property market was just reviving in Q1 2009, buyers with HDB addresses were involved in as much as 56 per cent of all deals. 'HDB upgraders are gradually taking a backseat' as home prices climb, DTZ said in its report.

While prices of subsales rose, such deals continued to make up just 13 per cent of all non-landed home transactions - a level unchanged from that in Q4.

There was also greater appetite for properties costing at least $3 million. In Q1, 737, or 9 per cent, of all caveats were lodged for these homes. Just 525, or 8.4 per cent, of all deals took place at this price level in Q4. The figures in Q1 last year were even lower, at 66, or 2 per cent, of transactions.

'The proportion of higher-priced homes that changed hands in (Q1) increased as interest in the higher-end tiers grew,' DTZ said.

The prime sector may be drawing more buyers, but some industry watchers note that it has yet to perform as well as anticipated. Response to some recent launches at Sentosa Cove, for instance, has been lukewarm.

Savills residential director Phylicia Ang suggested that the sovereign debt problems in Greece and other European countries, coupled with stock market volatility, may have led some potential buyers to stand on the sidelines. But 'we are still seeing deals happening in the high-end market', she said. 'For the year, I think we will still get stable demand.'

Large amounts of 'foreign money do not seem to have come in yet', said Ngee Ann Polytechnic real estate lecturer Nicholas Mak. High-end home sales are highly dependent on market sentiments, but 'financial markets are not totally in the pink of health'.

According to DTZ, foreigners accounted for 11 per cent of all private home purchases in Q1, down slightly from 12 per cent quarter-on-quarter. Their share of the market hit 14-15 per cent during the boom time in Q4 2007.

Malaysians were still the largest group among foreign buyers, although their presence has shrunk, to 22 per cent of foreign transactions in Q1 from 25 per cent in Q4. Indonesians were involved in 18 per cent of deals in Q1, and the Chinese in 17 per cent.

Most Indonesians in particular, favoured homes in Districts 9-11, the central business district, Sentosa and Keppel Bay. Some 59 per cent of them bought units in these areas, whereas just 18-36 per cent of Malaysians, Chinese and Indians did so. This reflects 'the higher budgets of the Indonesian buyers and their preference for units in prime locations', DTZ said.