S'pore moves up a rung in global retail rents ranking

Despite moderation in prime retail rents here, it's ranked 17th most expensive

PRIME retail rents in Singapore may have fallen marginally so far this year, but that has not stopped the city-state from moving up one place in CB Richard Ellis's latest survey of the world's most expensive retail locations.

According to the property firm's latest Global MarketView report on the retail sector, prime retail rents here were 17th most expensive in the world in the first quarter of this year, up from 18th in Q4 last year. 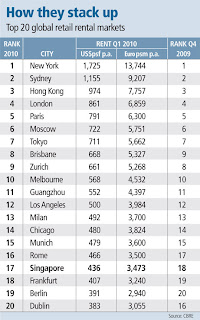 This was despite a moderation in prime retail rents here. According to the report, the average prime retail rent in Singapore at the end of Q1 this year was US$436 per sq ft per year, down slightly from US$444 at end-2009.

CBRE's director of retail services here, Letty Lee, said: 'Singapore has been successful in attracting a sizeable number of global brands and new-to-market concepts due to an abundant choice of prime pipeline supply in the Orchard Road and the Marina Bay areas. That in turn has put some pressure on prime retail rents.'

New York, Sydney, Hong Kong, London and Paris remained seated at the top of the table, keeping their positions as the top five most expensive retail markets.

A trend that came through in the report is that prime retail rents in the world's leading shopping destinations have stabilised in the majority of markets, and even grew in some major cities in Q1. This was despite a lack of retail sales growth in most markets.

'However, market pressures have not stopped retailers from expanding, and demand for prime retail space remains strong in many markets.'

The firm's head of cross-border retail for Europe, Middle East & Africa, Peter Gold, said it is too early to tell the gap will narrow during 2010.

Among regions, Asia appears to be leading the recovery, with retail markets generally strengthening in Q1.

'Thus far, Asia is the only region of the world where economic growth is starting to feed through into retail sales increases, and this is now starting to impact real estate markets,' CBRE said.

In particular, a number of international retailers are looking to expand their footprint into cities like Singapore, Hong Kong, Beijing and Shanghai, it said.

Source: Business Times, 26 May 2010
Posted by About Singapore Property