THE Government has moved to meet surging demand for housing by lining up the largest ever release of state land for private homes.

It has placed 18 residential or residential/commercial sites on the programme for confirmed sale in the second half of the year.

There will also be 13 sites for residential use on the reserve list. These plots - of which 20 are new and not rolled over previously - could accommodate about 13,905 new homes. 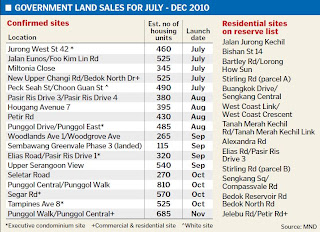 The plots range from areas in Jurong West to Pasir Ris and include land in mass-market areas like Hougang and Tampines.

'I hope that with this increased supply, home buyers will be assured that there is ample supply in the market and therefore... there is no need to rush,' said National Development Minister Mah Bow Tan yesterday.

'So this will probably... dampen some of the exuberance in the market,' he added.

The supply announced yesterday is 32 per cent more than the amount of land introduced in the first half of this year and is sure to put the brakes on developers bidding sky-high prices for sites, say property experts. And that means more reasonable prices for buyers as well.

'The Government is sending a strong signal to developers that there is no need to bid very high prices. Developers also have a good choice of reserve list sites but they will have to share the responsibility if there is a glut,' said Mr Mak.

The 18 confirmed list sites include five executive condominium plots. They will go on sale regardless of developers' prior indications of interest.

They will yield an estimated 8,135 housing units. This will be the highest number of units in any one release since land sales started in 1967.

The previous record was a release in the second half of the 2007 boom year that could accommodate just 3,000 units.

The reserve list contains 12 residential sites and one plot for commercial and residential use. These go on sale only if developers signal interest by making an acceptable initial offer.

Apart from a mixed-use site, the confirmed non-landed residential plots are in mass market spots such as Hougang, Punggol, Woodlands and Tampines. They can yield 265 to 810 units each.

Mr Mah had said in March this year that the Government will ramp up supply in the second half of the year to give developers more choice.

His comments came after the Government introduced two rounds of cooling measures, in September last year and again in February.

Yet demand has remained strong. In the first four months of the year, developers have already sold 6,587 units of new private homes - nearly 45 per cent of the entire sales last year.

Mass-market home prices have exceeded the 2007 peak levels and look set to rise further with developers bidding hard for sites.

'Developers afraid of emptying their landbank were bidding aggressively and prices were getting too crazy. Now, the whole system will adjust itself,' said a developer.

Jones Lang LaSalle's head of research for South-east Asia, Dr Chua Yang Liang, agreed: 'It looks like they are using the supply approach to cool prices. But the large supply is likely to affect prices only in the longer term.

'In the short term, demand is still supported by the economic recovery in the region and low interest rate environment.'

Dr Chua added the pace of demand has slowed in recent weeks, due to uncertainty over the euro zone crisis in Europe.

'Overall, mass-market home prices have risen. Will this supply bring it back down? I don't think so but it will help check the price growth.'

Source: Straits Times, 22 May 2010
Posted by About Singapore Property