Sign of healthy interest, but aggressive bidding appears to have abated

SEVEN property developers vied for a plum executive condominium spot in Sengkang, with the top bid coming in above market expectations at $176 million.

While the number of bids showed a healthy level of interest, they amounted to fewer than half the 18 offers a recent tender in Simei attracted. 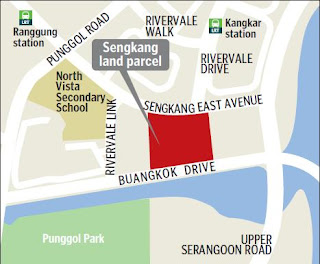 This has prompted analysts to suggest yesterday that aggressive bidding seen from developers recently seems to have abated.

The price is about 70 per cent higher than the minimum offer price of $103.8 million lodged by an undisclosed developer who triggered the plot's tender last month.

It is also 10 per cent higher than the second-highest bid, lodged by Hoi Hup Realty and Sunway Developments at $160.1 million.

The other unsuccessful contenders included Frasers Centrepoint, Qingdao Construction (Singapore) and Sim Lian Land, which was lowest at $115.8 million.

The site in Sengkang East Avenue is near the Sengkang LRT system and could yield 465 executive condominium units, which are condo-style homes subject to public housing rules.

The top bid came in about 2 per cent higher than the Compassvale Bow executive condominium site, also in Sengkang, which was awarded at $193.28 million or $315 psf ppr in March. 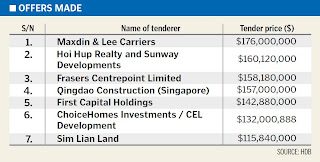 Analysts said they expected the break-even cost for the project to be between $590 and $620 psf.

He noted that nearby units in Park Green, The Rivervale and The Florida sold on the resale market for $500 to $620 psf between January and this month.

Ngee Ann Polytechnic real estate lecturer Nicholas Mak said units could even be launched at above $700 psf, depending on the market.

'At this level, prices are quite high for executive condominiums, as buyers expect them to be cheaper than private condos,' he added.

Mr Li said the bullish top bid could be because there are no more sites for such homes in Sengkang on the confirmed and reserve lists of the Government's land sale programme for the second half of this year.

Last week, the Government released the largest amount of state land for private homes in response to surging demand.

It put 18 residential or residential/ commercial sites on the programme for confirmed sale in the second half of the year, and 13 sites for residential use on the reserve list.

Mr Mak felt that given the glut of sites available for developers to choose from, the bids for the Sengkang site were 'too bullish'.

'With the release of so many sites, we expected it to have a dampening effect on bids,' he said.

Mr Mak noted that subsequent land tender values should start to moderate given the Government's aggressive move to make a wide range of sites available to developers.