M'sia, S'pore see light at the end of rail tunnel

Tg Pagar station to shift; KTM land may be developed jointly or swapped for other plots

(SINGAPORE) Many of the disputes that have dogged ties between Singapore and Malaysia over the past 20 years have stunningly been resolved.

The relationship is entering a new phase in which travelling between here and Johor Bahru will be a breeze while Singapore's Temasek Holdings and Malaysia's Khazanah Nasional join hands for a major project to develop Malayan Railway land here.

The jigsaw puzzle fell in place as an agreement was reached to move the 78-year-old Tanjong Pagar railway station - which sits on Malaysia-owned land along the fringes of the Republic's financial district - to Woodlands by July 1 next year. The announcements were made yesterday by Prime Minister Lee Hsien Loong and his Malaysian counterpart Najib Razak as they stood nearly shoulder-to-shoulder during a joint press conference at the Shangri-la Hotel here after a two-day retreat. 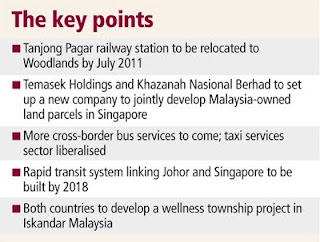 The breakthrough could see the Points of Agreement (POA) - a document signed back in November 1990 but stalled for years - finally put to rest as early as next month.

'There is urgency,' said Mr Lee. 'This matter really cannot wait indefinitely because it is already 20 years. And there are many development projects in Singapore which have been held up because the POA has not been implemented as it should have many years ago.'

One immediate fallout concerns the land owned in Singapore by Malayan Railway, which is said to be worth billions of dollars and runs alongside the tracks from Tanjong Pagar to Woodlands.

With an agreement on the Tanjong Pagar KTM station finally reached (Singapore will help move the station to the Woodlands train checkpoint), the focus shifts to developing six parcels of Malayan Railway land - one each in Tanjong Pagar, Kranji and Woodlands, and the other three in Bukit Timah.

To do this, the two countries have agreed to set up a company called M-S Pte Ltd to jointly develop the land. The company, which will be established by December at the latest, will be 60 per cent of the equity owned by the Malaysian government's investment holding arm Khazanah Nasional Berhad, with the remaining 40 per cent stake held by Singapore's state investment agency Temasek Holdings.

One option mentioned by Mr Lee yesterday was to obtain an updated valuation of the KTM land and make an offer to Mr Najib to swap the six land parcels for land of equivalent value in Marina South near the Marina Bay Sands integrated resort and/or the Ophir-Rochor area.

Mr Lee said he would make a trip to Kuala Lumpur in June to make such an offer to Mr Najib.

'We will make them an offer and it's up to them whether they want to accept. It will be very substantial, these are very valuable pieces of land we have developed,' said Mr Lee in response to queries from the media. 'Land prices have been moving over the past one year as the property market is quite active. That's why we didn't settle the land swap today.'

Song Seng Wun, a regional economist with CIMB-GK Research in Singapore, told AFP that the railway land's worth 'could be in the billions' of dollars.

Meanwhile, other pieces of the jigsaw have also fallen in place and they will boost connectivity between Singapore and Johor.

Once the railway station has been shifted to Woodlands, the Singapore government will ensure that train commuters will enjoy proper bus service connections to a nearby MRT station.

The two countries agreed to build a rapid transit system link between Tanjung Puteri in Johor and Singapore by 2018. The plan is to integrate this with public transport services to improve connectivity even further. The Customs, Immigration and Quarantine (CIQ) facility will be co-located in Singapore. Malaysia has the option of moving the new Woodlands KTM station to Johor after 2018 should it wish to do so.

The toll charges at the Second Link will be 'reduced significantly' on both sides to increase usage there, with the new amounts to be announced next month, said Mr Lee.

And instead of taxis picking up and dropping passengers only at designated stands in Singapore and Johor, they will be allowed to do so anywhere on the domestic leg of their journey.

The number of cross-border bus services will be doubled with eight additional routes, four from each side, between two pick-up points in Johor and the Marina Bay Sands and Resorts World Sentosa IRs, Boon Lay, Yishun, Newton and Changi Airport in Singapore. 'The improved rail and road connectivity would cut down the amount of transfer time,' Credit Suisse AG's director and Asian chief economist Joseph Tan told BT. 'There is definitely a positive effect on aggregate and this may take some business away from the airlines too.'

Meanwhile, the existing Tanjong Pagar railway building will be conserved given its historical significance, while the old Bukit Timah railway station building at Blackmore Drive could also be preserved.

'We see now the light at the end of the tunnel,' said Mr Najib. 'This is a big legacy issue and the time has come for a resolution. We cannot allow it to fester because it will always be seen as an impediment preventing us to progress and move forward in terms of our bilateral ties.'

Mr Lee added: 'It's a matter for rejoicing. We've got a good deal, and both sides are happy.'

Source: Business Times, 25 May 2010
Posted by About Singapore Property