By 2018, it will have at least 6 stations, meaning walks of 5 minutes or less to reach one

MARINA Bay is fast taking shape as Singapore's most rail-connected district, with no fewer than five MRT lines converging at the 360 ha reclaimed waterfront plot.

And by 2018, the Marina Bay district will have six or more MRT stations within an area no bigger than Sengkang, while people who live or work there will have to walk no more than five minutes to reach one.

The rail lines, she added, will connect the new downtown to all the residential and commercial hubs of Singapore.

Academics say the area is a textbook example of a transport-oriented development (TOD), a catch phrase describing urban developments that maximise access to public transport. 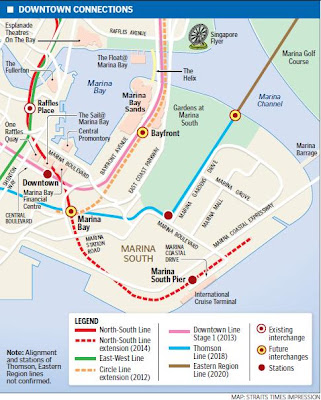 But making it work in practice is not always as straightforward.

'Since it is going to be our new business district, it has to be well connected, or super connected.'

An MRT line to Marina Bay was first announced in 1998. It was then known as the Marina Line, linking Dhoby Ghaut to the new downtown, and was to be completed in 2004. But the project was redrawn, and in 2005 it resurfaced as a Circle Line extension.

Transport researcher Lee Der Horng of the National University of Singapore said Marina Bay's success as a TOD depends on how convenient public transport there is compared with driving.

'Hong Kong is a very good example of a successful TOD,' he said. 'Hong Kong does not have COE or ERP, but the residents there choose public transport... The reason is very simple - public transport is easier and more convenient.'

Developers are excited about the prospects of a super-connected downtown. Hong Leong Group spokesman Gerry de Silva said prices of properties near MRT stations will rise as the network expands.

Last year, Transport Minister Raymond Lim told Parliament that commuters in the Marina Bay area will be able to reach an MRT station by walking no more than 400m on average. Some links will be completely underground, like the one joining City Hall station and Suntec City.

Mega developments at Marina Bay include the Marina Bay Sands integrated resort, Gardens at Marina South, and a new financial centre. Residential projects include The Sail. An international cruise centre capable of handling the world's biggest cruise liners will also be built there.

The Central Promontory, just across from the upcoming Downtown MRT station, will be a venue for entertainment and the arts.

But on the question of whether the new vibrancy will call for MRT trains to run longer hours, Associate Professor Anthony Chin, who specialises in transport economics at NUS, said: 'It takes more than night trains to make a city liveable and globally competitive. Someone has to pay for the increased cost of more night services. We have to weigh the incremental costs against the incremental benefits.'

Source: Straits Times, 24 May 2010
Posted by About Singapore Property