NEWS that a rapid transit line from Johor Baru to Singapore will be up and running by 2018 has whipped up anticipation among commuters, transport industry players and academics.

The experts, who say such a line has been a long time coming, add that it will open up a host of entertainment, shopping and leisure options for Singapore when it begins running.

The idea of a rapid transit link between the two countries has been talked about ever since the first Mass Rapid Transit (MRT) trains started rolling in Singapore 20 years ago. 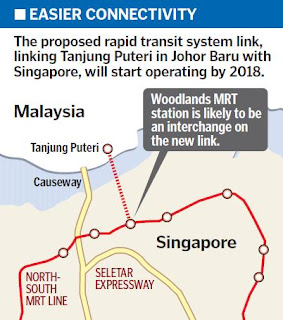 A formal announcement was made on Monday, when a joint statement by the two countries revealed that it would connect the Republic to Tanjung Puteri, which is near the Malaysian end of the Causeway.

When contacted yesterday, Transport Minister Raymond Lim said he was pleased that both governments had committed themselves to the project.

'I believe that a rapid transit link will greatly enhance connectivity between Singapore and Johor Baru,' he said, adding that the Joint Ministerial Committee for Iskandar Malaysia - an economic zone in southern Johor about three times the size of Singapore - will oversee the implementation.

The committee has been hammering out ways in which the two countries can cooperate on Iskandar Malaysia.

The Transport Ministry said it was still studying 'technical details' of the link, and added that additional information would be ready 'in the months ahead'.

Industry watchers, however, said the new line is likely to go north from Woodlands MRT station, and would likely be 4km to 5km long.

They noted that when the Singapore Government announced a northern extension of the MRT system in 1991, it said the Woodlands station would cater to a future connection to Johor Baru.

The line would benefit people on both sides of the Causeway immensely, they added.

Some 30,000 to 40,000 vehicles - mainly motorcycles - enter Singapore from Malaysia daily, and many such motorists would be tempted to switch to a train to avoid the hassle of jams and such.

Associate Professor Anthony Chin, who specialises in transport economics at the National University of Singapore, said: 'One other benefit I can think of - if we can get people off their bikes and onto the train - would be a reduction of air pollution from motorbikes.'

The chairman of the Government Parliamentary Committee for Transport, Dr Lim Wee Kiak, said: 'Singaporeans who do not drive will find travelling to Johor a breeze.

'This will certainly give Singaporeans more options of leisure, entertainment and shopping.'

He warned, though, that potential problems such as the smuggling of illicit and banned goods would arise.

However, he added: 'But I am confident these issues will be efficiently handled, just like at our airport, sea ports and land checkpoints currently.'

Resorts World Sentosa spokesman Robin Goh described the go-ahead for the link as a 'breakthrough in connectivity between Singapore and Malaysia', and expects it to benefit the tourism sectors on both sides of the border.

But would easier access to Malaysia hit Singapore retailers hard?

FairPrice, Singapore's largest provisions supplier, does not think so.

'Cost is not the only consideration. There are other aspects in our stores that contribute to the shopping experience.'