A Great place to live, work and play

That's the conclusion of the Urban Redevelopment Authority's (URA) latest lifestyle survey that covered 4,000 respondents, including 398 permanent residents and 395 foreigners. They were interviewed from August last year to March this year. Here are some of the findings

MOST Singapore residents - 72 per cent - prefer to live in public housing, according to the second URA lifestyle survey.

This is in contrast to the first survey done in 2002-2004 when nearly half said they wanted to own private housing.

HDB four-room flats are the best loved housing type, with nearly 28 per cent of respondents opting for it, followed by five-room flats. Three-room flats, private condos and HDB executive flats are also popular.

Housing cost was the most important consideration in terms of the respondents' choice of location, followed by proximity to public transport and neighbourhood facilities.

Said 38-year-old Nathaniel Koh: 'I aspire to own a piece of private property. But given what I can afford, I would buy a three-room flat if I remain single or a resale four-room flat if I get married.'


ALMOST 80 per cent of older respondents prefer to stay in regular housing rather than retirement villages or flats for the elderly.
They cited cost as the biggest factor influencing their housing choice, followed by access to public transport and proximity to neighbourhood amenities like wet markets and clinics.

'Not only will the rent for private retirement villages be expensive, when you pass away, you won't have a house to leave for your children,' said Madam Chong, 66, on why she preferred living at home. She did not want to give her full name.

Other factors holding the elderly back from moving into retirement villages are the desire to retain a sense of independence, to age in a familiar environment and to encourage inter-generation interaction.

WHILE Singapore is seen as an endearing home, about 73 per cent of respondents feel its physical landscape changes too quickly.

They believe that familiar places contribute strongly to their sense of belonging and should be kept at all costs.

Even more striking, 96.6 per cent of respondents feel that hawker centres should be maintained as a key amenity in our housing estates.

These centres as well as local shops are seen as being important to a neighbourhood's identity.

'The hawker centre represents the easy mixing of all races and it gives us character,' said Mr See Chan Teck, 76.

More than 90 per cent of them feel that greenery contributes strongly to the nation's identity, citing East Coast Park, Botanic Gardens and Bishan Park as places that make Singapore special.

THE variety and vibrancy of nightlife is leaving 57 per cent of residents less than satisfied. But 51 per cent, mostly the elderly and parents with young children, were neutral on the issue.

To encourage later nights out, those polled cited extending the hours of public transport and entertainment places as the most important factors.

Singapore's leisure environment scored well with 84 per cent saying they were satisfied, while 92 per cent felt Singapore offered activities they like.

The rest cited mostly outdoor activities, such as skiing, hiking, sky diving and bungee jumping, as activities that were lacking.

Business development officer Jacob Lim, 26, said Singapore lacked the buzz of many other world-class cities like Hong Kong and London.

'It's pretty much the same scene over and over again here. There are only that many places, and even Clarke Quay is getting too crowded,' he said.

'Everything seems planned from the top down - even where the nightlife should be - but you can't plan fun in such a manufactured way.'

THE allure of the city centre as a work place has faded with more people wanting their offices to be closer to home.

The poll found that 66 per cent of respondents wanted to work in their immediate neighbourhood.

Toiling in the city centre came in a distant second at 13 per cent.

The ease of access to work and its proximity to public transport and home were cited as the top three factors influencing choice of employment location.

With 63 per cent of those polled taking public transport to work, respondents also picked cheaper fares and increased frequency of services as ways to encourage a greater use of buses and trains.

Sales coordinator Tay Mei Fong, 47, said she takes about an hour to get to her work place in Havelock Road from Simei, using the train and public bus.

Her views are similar to the 40 per cent of respondents who take more than 30 minutes to get to their place of employment.

It is no surprise that 69 per cent wanted travel times of under 30 minutes.

'I would definitely prefer working close to home as it would reduce my transport costs, allow me to avoid congestion on the road and also allow me to be able to rush home if there are any emergencies,' Madam Tay said.

FOREIGNERS and Singaporeans said watching TV and movies at home is their top leisure activity.

But while going to a pub or club was the second favourite activity for foreigners, it did not make the top five for Singaporeans.

The survey found that 87.3 per cent of foreigners surveyed agreed that Singapore is a great place to live, work and play in.

Eighty-one per cent also agreed that Singapore is a vibrant and exciting city with its own distinctive character.

What they like most about Singapore are its clean and safe environment and the climate. Nearly nine out of 10 respondents said that greenery contributed to Singapore's identity.

Only about 54 per cent of the foreigners said they were satisfied with the night-life offerings, with a significant proportion neutral on this.

About 93 per cent of all foreigners rent their homes. 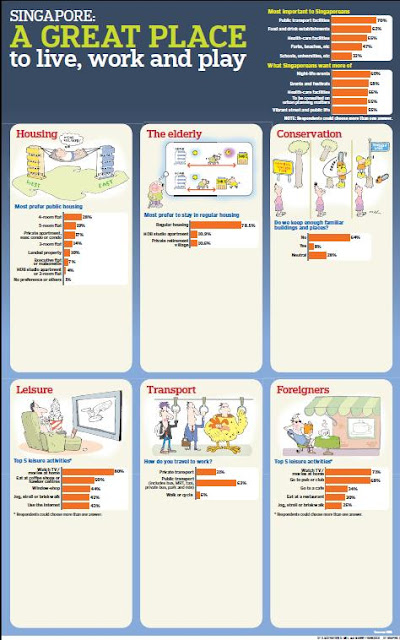 Source: Straits Times, 1 May 2010
Posted by About Singapore Property