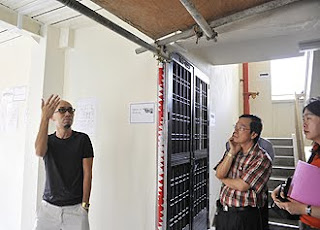 THE offer was laid on the negotiation tables by the HDB. But a group of Eunos residents who have been unhappy for years over external lift shafts which block their homes are refusing to budge

Some of the 42 affected flat owners in Blocks 411, 415 and 417 in Eunos Road 5 refused to accept any of the four options offered over the weekend by the HDB in its latest bid to solve the problem.

Some of them crossed out all the options with marker pens and wrote on the form that they were still not happy with the olive branches offered.

Some want the offending lift shafts totally torn down instead.

These Eunos residents face a rather unique problem because of the way the three blocks were constructed. Each block is in a U-shape and the two staircases are located at both ends of the U while existing lifts are located in the middle.

Because odd-numbered floors do not share a common corridor - the building combines double-storey maisonettes with single-storey corner units - just upgrading the existing lift shafts was not sufficient to give all units lift access.

When the estate went through a lift upgrading programme which started in early last year, the two additional lift shafts per block could not be built facing a staircase like how it is done with most other blocks.

The new shafts ended up blocking residents' flats from sunlight and wind, making their homes dark and hot. They have had to switch on lights and air-conditioning during the day, increasing their utility bills. One resident even reported mildew growing on his walls.

Since 2006, some of the 42 flat owners have been taking on the HDB since they found out where the new lifts would be positioned. They have had numerous meetings with the HDB and the area's Member of Parliament Ong Seh Hong.

At a discussion last month, it was agreed that the project consultants to the lift upgrading works would come up with several options on tweaking the designs of the lift shafts. But at a survey conducted over the weekend on residents' preferred options, most residents who came by to look at the mock-ups were still unhappy.

Some of them surrounded HDB's deputy director of upgrading programmes management Chee Kheng Chye last Saturday morning, firing questions at him. The questions included why the lift shaft was built blocking most of the front door and one bedroom unit, when in a brochure given out to residents, the lift shaft had appeared different on the floor plan. The diagram, explained Mr Chee, is schematic and not drawn to scale.

Residents said the suggested changes were too minor to make a real difference.

One design suggested replacing part of a newly constructed wall linking the lift shaft to the corridor with aluminium fins to improve the ventilation and lighting. But as the fins are tilted at an angle to prevent people from looking into affected homes, residents said it did not make much difference. Yet, not doing so would compromise their privacy - the windows would expose their homes, including the bedroom, to the full view of anyone using the lifts.

Retiree Chew Keng Woh, 64, who rejected all the options, said: 'They have to give us an alternative, then we can make suggestions.'

Corporate planner Khng Hwee Peng, 40, who also said no to all the options, said: 'I wouldn't go to the extreme of tearing down the whole thing but we're still hoping that they will come up with a solution to add ventilation and light.'

Others, like retiree Eng Ah Hee, 63, suggested the HDB buy back their flats so they can relocate elsewhere. They said the value of their flats have been affected.

While the HDB had earlier said it would proceed with only options picked by a majority of the affected residents, it said yesterday that it would be referring the survey results to the working committee and the area's MP to decide what to do next.

Dr Ong said he hoped residents would consider the choices offered, saying that the project had been delayed for six months while solutions were explored. 'You cannot say the HDB has been short of trying,' he said.

The lift upgrading was scheduled to be completed by the first quarter of next year but now, it is likely to be done in the last quarter instead.

But at least one affected resident will be choosing from existing options. Madam Asia Mahwan, 44, said that if the project continues to be delayed and left as a construction site, the dust and debris would be a continuing inconvenience. 'We have no choice. We have to compromise...I don't think HDB will pull down the lift shafts.'