A one-day preview at the upmarket Marina Bay Suites development saw invited buyers snap up most of the 90 units released for sale at average prices ranging from $2,200 to $2,500 per sq ft (psf). 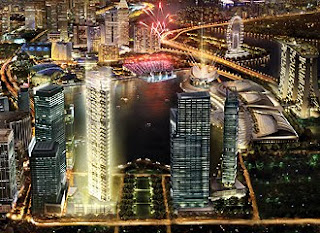 At least 81 units were bought yesterday at the 99-year leasehold, 221-unit condominium in Marina Bay, whose launch had been delayed by almost two years, said a spokesman for Raffles Quay Asset Management, which manages Marina Bay Financial Centre. The centre has two residential towers – Marina Bay Residences, which sold out in late 2006, and Marina Bay Suites.

Prices achieved were below the expectations the developers had early last year, before the property market slumped as the global crisis took hold.

It was then thought that the condo could be priced around $3,000 psf, given that the most expensive units in Marina Bay Residences and The Sail @ Marina Bay had then traded beyond that price level.

The condo has units of three- to four-bedrooms ranging in size from 1,572 sq ft to 2,691 sq ft, as well as three larger penthouses.

Yesterday, the three-bedroom units went for between $3 million and $3.7 million.

About two-thirds of the Marina Bay Suites buyers were Singaporeans, with the balance made up of foreigners, permanent residents and a few companies, said Mr Joseph Tan, executive director for residential properties at one of the marketing agents, CBRE.

Marina Bay Suites had been slated for launch early last year when there was talk that the three-bedroom units would command a price of $4 million to $5 million.

But the market downturn prompted the postponement and, said Mr Tan, the preview had to be pitched at today’s prices.

Cushman & Wakefield managing director Donald Han agreed that in today’s high-end market, ‘you need to provide a discount from the peak levels’.

‘The value proposition is there for investors keen on luxury properties,’ he said.

‘Generally, there may be more upside as prices in the high-end to luxury markets are still about 20 per cent to 25 per cent from the peak levels in early 2008.’

Mr Han said the market is seeing demand slowly returning in the $2,000 psf to $3,000 psf range, but not yet for those priced above these prices.

‘The lure factor of Marina Bay properties is the proximity to the integrated resort, and the finite supply of homes there,’ said Mr Han.

Sellers are hoping that values in the area will rise by the time the integrated resort in Marina Bay is completed, he said.

Indeed, Mr Tan said the plan was to launch the condo at ‘better prices’ in the first half of next year when the integrated resort opens.

The showflat would be ready by then.