ALMOST a year ago, the Government pledged to ramp up the supply of smaller flats to meet demand from downgraders amid Singapore’s deepest recession.

But 12 months on, new Housing Board figures obtained by The Straits Times show that the take-up rate of these smaller flats has not been as strong as expected. 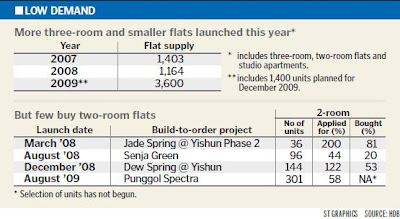 The weakest sales are in the two-room category. At Senja Green in Bukit Panjang launched under the HDB’s build-to-order (BTO) scheme in August last year, the take-up rate of two-room flats was 20 per cent – 19 flats – of the 96 two-room flats offered.

At two other projects, Jade Spring @ Yishun Phase 2 and Dew Spring @ Yishun, the take-up rate for two-room flats was 81 and 53 per cent of flat supply respectively.

HDB’s numbers show the application rates for smaller flat types ranged from about 40 per cent to three times the number of flats offered – less than the typical four to five times seen for four- and five-room units.

However, when it came to sales of smaller flats, studio apartments and three-roomers did relatively well compared to two-roomers, with take-up rates of about 96 to 100 per cent.

Analysts say the less-than-hot demand could be due to the turnaround in the property market in the second quarter of this year, which came sooner than expected.

‘The longer home owners hold on to their flats, the higher their capital gains,’ he said.

HDB data reveals that the supply of smaller flats has been increasing in recent years – after a lapse of about two decades during which it stopped building this type of flats.

HDB said it intends to launch 1,400 two- and three-room flats under its BTO programme next month.

The HDB stopped building two- and three-roomers in the 1980s as the growing number of families fuelled demand for bigger flats, but they were re-introduced in 2004 to meet increasing demand.

This was meant to offer a steady stream of these flats for lower-income families who needed to downgrade amid the grimmer economic times.

Industry observers such as Chesterton Suntec International research and consultancy director Colin Tan pointed out that two-roomers might be less popular because of their small size of about 485sqft.

Studio apartments are aimed at a specific group – the elderly – and three-roomers appeal to families given their more spacious 700 sq ft or so.

‘The market seems to be saying that it doesn’t want two-room flats’, but they could become more popular as they are built, as they offer downgraders a more immediate housing option, Mr Tan added.

HDB said that the take-up rates of two-roomers are usually lower at the initial stage after launch.

‘However, despite the initial weaker demand, the take-up of two-room flats improves during subsequent sales exercises when the flats are nearing completion or are completed,’ it said in a statement.

Housewife Koh Gay Hua, 50, considered downgrading from her five-room flat in Bukit Panjang to a smaller flat at the height of the recession.

‘But now, with HDB prices still rising, and with some help from my children, I don’t have to sell,’ she said.

On next year’s supply of flats, HDB is ‘monitoring response to the smaller flats and will make adjustments to the supply to meet the needs of flat buyers’.