Subsales in past 2 quarters among highest since 1995

The number of subsales in the second and third quarters of this year were among the six highest quarterly figures since 1995 – reflecting the build-up in subsale activity that led to the government announcing measures on Sept 14 to cool property prices.

The completion of several condos this year – many of them large projects, close to MRT stations or near new projects launched this year – helped to boost their demand in the subsale market. 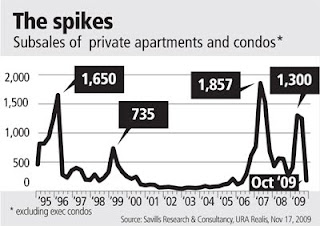 As well, the rise in private home prices this year has given sellers an incentive to let go units bought earlier.

Savills Singapore’s analysis of caveats captured by URA’s Realis system as at Nov 17 showed that 1,249 caveats were lodged for subsales of private apartments and condos in Q3 this year, a tad below the 1,300 caveats in Q2.

Since 1995 (when the Realis caveats database was first set up), there had been four other quarters when subsales of condos/apart- ments exceeded the 1,000 mark – during the 1996 and 2007 property market highs.

Projects that topped the subsales charts in Q2 and Q3 this year had generally been launched a few years ago and many of them were completed this year. Examples include Rivergate in the Robertson Quay area, Casa Merah near Tanah Merah MRT Station, City Square Residences along Kitchener Road, The Metropolitan Condo in the Alexandra Road area, The Centris in Jurong and Botannia in West Coast.

Projects that have been recently completed or which are nearing completion offer added appeal to potential buyers keen to move in or rent them out soon. 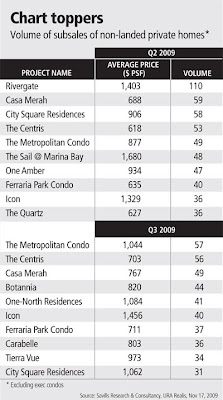 Giving a seller’s perspective, Knight Frank chairman Tan Tiong Cheng said: ‘If they bought their properties with the intention of leasing them out and if they find today’s rental market challenging, it may make sense to simply cash out, especially if they can make a profit.’

Savills’ lists of the most popular projects in the subsale market in Q2 and Q3 2009 did not include developments launched this year, with the exception of The Quartz, which was relaunched this year.

‘Those who bought projects launched this year would find it harder to flip because their entry price may already be very high,’ says Lee Hon Kiun, owner of Landmark Property Advisers.

Subsales refer to secondary market transactions in projects that have yet to receive Certificate of Statutory Completion. This can take place three to 12 months after Temporary Occupation Permit (TOP).

While subsales are often tracked as a gauge of speculative activity, Mr Lee hesitates to equate the increase in subsales in Q2 and Q3 this year with speculation. ‘Those who bought two to three years ago and sold this year… in the Singapore context, that’s a very long time,’ he chuckled. ‘Speculation is when people buy a property and flip it within six months to make a profit,’ he added.

Savills senior manager (research and consultancy) Christine Sun said new property launches by developers also fuelled subsale interest for nearby projects released a few years ago. For example, the release of Alexis, Ascentia Sky and Interlace in the Alexandra Road area could have helped subsales at The Metropolitan Condo nearby, which was completed this year.

Agreeing, Landmark’s Mr Lee said buyers can pick up more attractive buys in the subsale market for earlier launched projects than at new launches in the same area.

A developer said: ‘Personally, I advise friends to buy in subsale projects as prices are discounted to new launches.’

HDB upgraders bought 39 per cent of the 1,300 private apartments/condos transacted in the subsale market in Q2 this year, although the figure has slipped to 36.6 per cent in Q3 and 33.7 per cent in October. Nonetheless, these figures are higher than HDB residents’ 20.8 and 23.1 per cent share of subsale purchases during the property bull market in Q2 and Q3 2007.

Analysts say the jump in HDB resale flat prices has narrowed the price gap with private housing and made it easier for HDB dwellers to upgrade to a private home; and the subsale market offers a ready supply of recently completed homes that are ready for occupation.

Secondly, existing HDB flat dwellers looking for a bigger home may be deterred from picking one up from the HDB resale market because of high prevailing cash over valuation premiums. ‘If they fork out a little more cash, they could foot the downpayment for a private condo in the subsale market instead,’ said the developer.

Savills also provided monthly subsales data for non-landed private homes, which showed that for this year, the figure peaked at 596 in June.

It has since declined to 483 in July, 441 in August, 325 in Sept and just 184 in October – as at Nov 17 when Savills extracted the Realis data. It also observed an increase in the number of foreigners (including permanent residents) snapping up condos and apartments in the subsale market. Their share of purchases in the subsale market rose to about 31 per cent in Q3 this year and 33 per cent in October – from 21 per cent in Q1 2009.

Between 2007 and the first 10 months of 2009, Indonesians were the top buyers in the subsale market, followed by Malaysians, mainland Chinese, Indians and UK nationals.