CLOSE to two-thirds of Punggol flats launched in the last decade have been completed so far, as the Government focuses its efforts on building up Singapore's north-east neighbourhood. 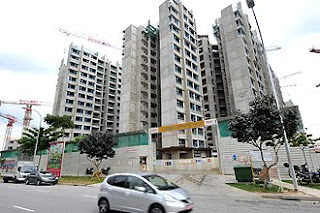 The results were released to the media earlier this month. The winning entry, by international architectural firm Group8asia and local firm Aedas, features sky terraces and a resort-style environment.

This housing project of 1,200 units fronting an upcoming waterway is due to be launched by the middle of next year. It will be part of a cluster of an additional 21,000 flats and private homes.

Punggol has become a focal point again for the Government in recent years, as it is slated to evolve into a vibrant waterfront town.

In the 1990s, efforts to develop the estate were stymied by the Asian financial crisis.

The plan was resurrected in 2007, under the Punggol 21-plus programme.

Since then, despite yet another economic downturn, there has been aggressive efforts to build up Punggol.

Almost 44 per cent of new flats launched in Singapore in the last two years have been in Punggol.

Besides new housing, a 4.2km waterway will also be developed. Its name - My Waterway@Punggol - was announced last night.

Mr Teo said that the canal is still on track for completion at the end of next year.

Next month, workers will start landscaping work at the town park and the areas along the waterway promenade.

'We all look forward to canoeing, kayaking or enjoying other water activities right at the doorsteps of our Punggol residents,' said Mr Teo, who is a Member of Parliament for the Pasir Ris-Punggol GRC.