HDB upgraders account for a shrinking share of private home transactions as property prices rise and mass-market launches taper off. 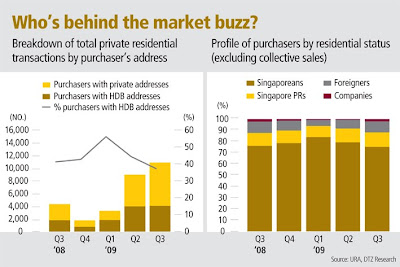 According to property consultancy DTZ, buyers with HDB addresses picked up 4,065 private homes in the third quarter. This was 73 units or 1.8 per cent more than in the preceding quarter.

Though still rising in number, these deals are making up a smaller proportion of all sales. They accounted for 37 per cent of private home transactions in Q3, down from 44 per cent in Q2 and the recent peak of 56 per cent in Q1.

This reflects ‘the diminishing buying power of HDB upgraders’ as property prices rise, DTZ says. It notes that prices of private resale homes have climbed 9-22 per cent from their lows in Q1.

ERA Asia-Pacific associate director Eugene Lim points out that there were fewer mass-market launches in Q3. Encouraged by rising resale flat prices, HDB upgraders had gone for these more affordable projects in the early part of the year, reviving the property market.

But in October, the pricier Core Central Region (CCR) trumped other parts of the island in terms of the number of new private homes launched and sold. Developers pushed out 339 units in CCR, surpassing 40 in the Rest of Central Region (RCR) and 187 in the Outside Central Region (OCR).

The buying mood may be wearing thin among HDB upgraders, but it is still strong among private housing dwellers. DTZ found that buyers with private addresses picked up 6,837 units in Q3 – 1,846 units or 37 per cent up from the previous quarter.

Not only are private housing dwellers buying more units, they are also paying more. According to DTZ, 66 per cent of them bought units that cost more than $1 million in Q3.

Some 90 per cent of transactions involving buyers with HDB addresses were for homes outside Districts 9, 10 and 11. Many of them were attracted to The Gale in the Upper Changi area, Trevista in Toa Payoh, and Parc Imperial in Pasir Panjang.

Among foreigners and PRs, Malaysians bought the most homes, accounting for 26 per cent of transactions. Indonesians took second place with a 19 per cent share, followed by mainland Chinese and Indians, with 14 and 12 per cent shares respectively.

DTZ says the number of corporate transactions jumped more than four times to 225 in Q3.