Reit investors get a reality check

(SINGAPORE) After a heart-stopping year, investors in real estate investment trusts (Reits) seem to have swallowed a dose of reality on what the sector can - and cannot - deliver.

It was a lesson learnt the hard way. Once favoured for offering high capital gains, the Reit sector lost that shine early in the year as unit prices tanked - the FTSE ST Reits Index fell as much as 50 per cent from September 2008 to March 2009. The sector was hit by market concerns over earnings, as property rents and occupancy rates dropped, and debt levels, as credit lines froze. 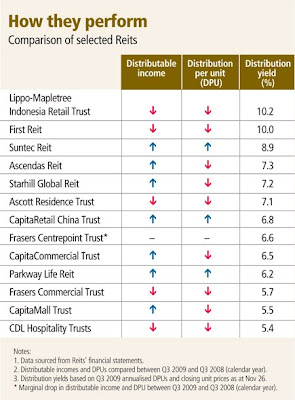 Saizen Reit, for one, was forced to suspend distribution payouts since its fiscal second quarter because of credit problems. More recently, the public wrangle between MacarthurCook Industrial Reit and Cambridge Industrial Reit highlighted the financing issues that the sector has to grapple with.

What stood out amid the tumult was the ability of most Reits to deliver decent yields - something which many investors had neglected when they chased capital gains before the recession. Looking at annualised distributions per unit (DPU) in the third quarter of the calendar year and closing unit prices as at last Thursday, all 13 Reits BT looked at had distribution yields of more than 5 per cent.

This has changed how investors view the sector. 'People are becoming more receptive to Reits as yield instruments rather than as growth instruments,' noted CIMB Reit analyst Janice Ding.

The financial crisis has tested the strength of the Reit model and revealed risk factors which investors may have previously overlooked, market watchers say. OCBC Investment Research analyst Meenal Kumar said: 'We believe this is for the better, as investors now have a more balanced perspective on the strengths and weaknesses of this investment vehicle.'

Overall distribution yields in the sector could have been higher if not for weaker DPUs. Of the 13 Reits, as many as nine saw their DPU slide from a year earlier.

For five of these nine, lower DPUs were caused by reduced earnings. This was the case for those in the hospitality sector - Ascott Residence Trust and CDL Hospitality Trust both had less distributable income as the downturn hit tourism.

But there were four other Reits with lower DPUs even though their distributable income increased. Equity raising was the culprit - all four conducted rights issues or private placements in the one-year period under review. This means that distributable income had to be spread over larger unit bases, lowering DPUs.

Equity raisings have been rife among Reits, as they tried to pay off maturing debts amid the credit crisis. Their efforts have been successful - so far - in reducing the pressure on the balance sheet. According to the Monetary Authority of Singapore's Financial Stability Review, the local Reit sector had 18.5 per cent of total borrowings maturing in 2009 and 2010 as at end-October this year, down from 57 per cent at end-2008.

While immediate refinancing pressures have eased, Reits still have huge chunks of debt due in 2011 and 2012. This leads some analysts to believe that equity raisings will continue next year. CIMB's Ms Ding expects acquisitions - on top of debt repayment - as another driving factor. With so much fund raising, more discerning investors may also not respond well to cash calls used merely to reduce debt, she added.

Some Reits are already showing renewed appetite for assets. 'We expect more acquisitions in 2010 as that is an important growth strategy underpinning the Reit model,' said OCBC's Ms Kumar.

The pace of acquisitions may be constrained in the medium term because Reit managers are targeting lower gearing after the crisis, she added. 'But risk appetite is not static and it could increase as and when the property market recovers.'

For now, Reit investors are likely to remain cautious. As the MAS highlighted in its report, several other risks remain - credit conditions could worsen again with sudden and large declines in financial markets, and rental yields for commercial and industrial space could fall further.

In particular, office Reits are gaining little favour among analysts. CIMB's Ms Ding believes that negative rental reversions will set in next year and affect DPUs. The dilutive effect of rights issues and private placements will also extend into 2010 for some Reits, she said.