Its score remained the same while other markets improved theirs

SINGAPORE has slipped two places to 16th in a ranking of the transparency of major real estate markets worldwide. 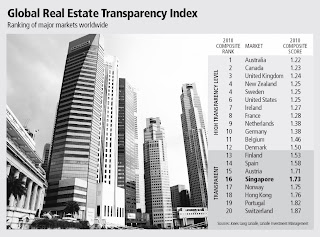 Singapore scored 1.73, which placed it 14th in the previous index. But with the same score this year, Singapore has taken 16th spot, as several European nations including Sweden, Ireland and France improved their scores. A score of one is the best and five is worst.

The greatest improvements in transparency in the region were recorded in China and India.

'The big improvement for China and India has been mainly due to increased data availability and ongoing regulatory changes,' said Jane Murray, JLL's head of research for the Asia-Pacific.

In both markets, a recent boom in real estate contributed to the improvements as public and private sector players took steps to promote transparency, she said. 'International corporate occupiers and investors are increasingly demanding better information on market fundamentals, while government agencies and market regulators have made slow but steady progress on the regulatory and legal front.'

Singapore and Hong Kong are classified as 'transparent' but not 'highly transparent' because there is room for improvement in two areas for both markets, Dr Murray said. Both countries lack investment performance indices, for example, she said.

In light of the global financial crisis, the index assessed - for the first time - the transparency of the real estate debt markets in terms of the breadth and depth of data available on commercial real estate debt.

Factors such as outstanding balances, maturities and defaults, as well as how thoroughly real estate debt on banks' balance sheets is monitored, were considered. Singapore did well in this aspect, scoring high for its regulatory and legal environment.

Alastair Hughes, JLL's chief executive for the Asia-Pacific, said one of the chief concerns for international real estate investors is where to place their capital safely.

The index helps investors and occupiers operating in foreign markets to anticipate challenges, he said. And for governments and industry organisations, the index provides a gauge to help improve transparency in their home markets.