(SINGAPORE) Latest flash estimates from the National University of Singapore show that its overall price index for non-landed private homes rose 2.6 per cent in May over the preceding month. Since the end of last year, the index has appreciated 8.6 per cent. 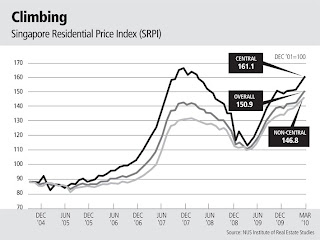 The sub-index for the central region, which covers a basket of properties in postal districts 1-4 and 9-11, grew 2.5 per cent in May over the preceding month, and 7.9 per cent year to date.

The sub-index for non-Central region rose at a slightly faster clip, of 2.6 per cent month-on-month in May and 9.1 per cent year to date.

Developers' sales have slowed since May as Europe's economic crisis affected financial markets, causing home buyers to withdraw to the sidelines, even ahead of the June school holidays and World Cup season. The market is expected to enter a consolidation phase, marked by slower sales as developers try their best to maintain prices and potential buyers hold back their purchases, hoping for price cuts.

Tomorrow, the Urban Redevelopment Authority will release its second quarter flash estimate for the official private home price index. In Q1, the index climbed 5.6 per cent over the preceding quarter. CB Richard Ellis yesterday predicted a 2-3 per cent quarter-on-quarter rise in this index for Q2. URA's index covers both completed and uncompleted properties, including the new launches market.

'The price points of new mass-market projects launched in the second quarter were at similar levels to those launched in the previous quarter, but those in the mid-tier segment (city-fringe locations and landed homes) have inched up slightly,' the property consultancy said.

The developers are estimated to have sold 8,300 units in the first half of this year. They sold 14,688 new homes for the whole of last year.

Commenting on second- quarter sales in the developer sales or primary market, the property consulting group said: 'The projects that sold well were mostly in the low to mid-tier price range. Sales of new upmarket homes moved at a slower pace in the second quarter as foreign investors held back their purchases due to the weakening of some foreign currencies against the Singapore dollar.'

Based on caveats lodged, HDB upgraders' share of new private home purchases slipped from 37.9 per cent in Q1 to 33.7 per cent in Q2. 'The reduction could be attributed to a smaller supply of mass-market type of projects being launched in the second quarter compared to the first quarter,' it added.

In the resale market, CBRE estimates that some 3,400-3,600 private homes changed hands in Q2, about 15-20 per cent lower than the 4,261 units in Q1. 'Subsales numbered around 500 in Q2, down from 806 in the preceding quarter, as the market became less bullish and sellers were mindful of the stamp duty payable if they sold their property within a year of purchase,' it said. Subsales and resales refer to secondary market transactions; subsales involve projects that have yet to receive Certificate of Statutory Completion (CSC), while resales involve projects with CSC.

NUS's overall SRPI is now 36.1 per cent above the post-financial crisis low in March last year. Over the same period, the growth for the central region has been 41.7 per cent and that for the non-central region, 33.2 per cent.

Despite the stronger increase in the central region, the flash estimate index for May for the location was still 3.7 per cent shy of the pre-financial crisis peak in November 2007. In contrast, for the non-central region, the latest index has already exceeded its respective January 2008 pre-crisis peak by 11.1 per cent. As a result, the overall SRPI flash estimate index for May is 5.5 per cent above its November 2007 high.