SINGAPORE is ranked the third most transparent property market in Asia-Pacific, according to a key industry index.

The league table places Singapore at 16th worldwide, two spots ahead of Hong Kong but behind regional rivals Australia, ranked first, and New Zealand at fourth.

Singapore has slipped two places from the last survey in 2008. Its score has remained unchanged but other countries have moved up the ladder. 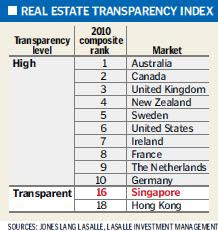 'Rising levels of transparency are associated with rising levels of foreign direct investment, a powerful incentive for encouraging the free flow of information and the fair and consistent application of local property law,' said Jones Lang LaSalle, which compiled the index with its unit LaSalle Investment Management.

More transparent market conditions allow for quicker investment deals between one foreign investor and another, it said.

The index, which was started in 1999 and is updated every two years, covers all property sectors, though the bulk comprises commercial real estate.

'The transparency of our regulatory framework supported the influx of US$4.7 billion (S$6.4 billion), which is more than half of the total dollar value investments, into the commercial asset market during the peak in 2007,' he said.

Dr Chua cited the launch of the National University of Singapore residential price index, an alternative to the Urban Redevelopment Authority service, as a move in the right direction.

He added that recent government moves to increase the level of professionalism and general practices of real estate agents are long overdue.

'As a key vital component in the real economy, the real estate industry needs to strengthen its ethical standards and the eventual regulatory structure if enforced will surely push Singapore further up on the rankings,' said Dr Chua.

In Asia-Pacific, Singapore ranks one place ahead of Hong Kong after new questions on commercial real estate debt - a contributing factor of the financial crisis - were considered.

Hong Kong is 'more laissez-faire' in the regulatory sector and its monitoring of debt is slightly less rigorous than in Singapore, Dr Murray said.

Overall, the index showed a notable slowdown in the progress of real estate transparency over the past two years, suggesting that industry players were focusing on survival rather than market advancement during the financial turmoil.