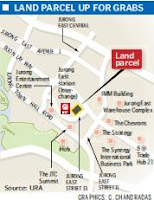 This is more than double the minimum expected bid of $350 million for the 99-year leasehold site, next to Jurong East MRT station.

The top bid came in just 2.8 per cent above the second bid of $728.8 million or $632 psf of gross floor area from CapitaLand Retail RECM's Energy Trustee.

Far East Organization and Frasers Centrepoint were third with a price of $677 million or $587.3 psf of gross floor area.

China-based Qingdao Construction was the lowest of the six bids with $418 million or $362.6 psf of gross floor area.

Colliers International's director for research and advisory, Ms Tay Huey Ying, said the encouraging response is 'proof of the private sector's confidence in the Government's plans to develop Jurong Lake District into a major regional centre and leisure destination by the lake'.

When awarded, this tender will probably serve as a catalyst for more private sector developments in Jurong, 'thereby accelerating the attainment of the Government's vision for this new growth area, and helping to chart Singapore's next lap', added Ms Tay.

Property experts believe the top bidder is likely to develop a retail mall using all or most of the other 70 per cent.

Said DTZ's head of South-east Asia research, Ms Chua Chor Hoon: 'This combination will make the best use of the site, which is the 'crown jewel' in Jurong Gateway (the planned commercial hub).

'There will be high footfall through the retail mall due to the integration of the development with the MRT station and connection to nearby developments through elevated walkways required by the Urban Redevelopment Authority.'

CBRE Research executive director Li Hiaw Ho estimates a gross development value of $2,200 psf to $2,400 psf for the retail mall and $1,000 psf to $1,200 psf for the office component, based on the top bid for an office and retail complex.

If apartments are built on the site, they could be launched at some $920 psf, said Mr Mak.

Plans for Jurong Lake District, covering 360ha - about the size of Marina Bay - will be implemented over 10 to 15 years, with two precincts. Jurong Gateway precinct will be the biggest commercial hub outside the city centre. Lakeside precinct is to be turned into a world-class leisure destination for residents and tourists.