In Asia-Pac, it's now fourth, after Tokyo, Osaka, HK: survey

SINGAPORE is the 11th most expensive city in the world for expatriates, one place lower than its 10th position last year, says HR consultancy firm Mercer.

But the city moved up a notch to fourth place among cities in Asia-Pacific - which for the first time has three cities in the top 10 list of the dearest places for expats. 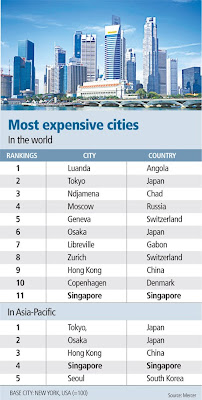 Tokyo remains the most expensive city in Asia-Pacific, with sister city Osaka second, and Hong Kong third. Singapore and Seoul round out the top five.

Cathy Loose, Asia-Pacific global mobility leader at Mercer's information product solutions business, said: 'Cities in Asia, such as Tokyo and Osaka, continue to be the most expensive cities given the relatively strong yen against other major currencies such as the US dollar.

'Other high-ranking cities such as Hong Kong, Singapore and Beijing remain relatively the same in terms of overall cost-of-living ranking.'

Part of the reason Asian cities feature more prominently in the worldwide top 10 list is the rise in residential property prices in the region, said Mercer senior researcher Nathalie Constantin-Metral.

'At the end of 2009 and the beginning of 2010, residential property prices in many Asian countries rose as the economic environment began to stabilise and demand for good expat housing increased,' said Ms Constantin-Metral.

Among the 214 cities surveyed by Mercer, Tokyo was ranked second worldwide, giving up its place as the world's most costly city for expats to Angola's capital Luanda.

Ndjamena, in the central African nation of Chad, was placed third, followed by Moscow, then Geneva.

Mercer said the high living costs in some African cities reflects the continent's increasing economic importance across all business sectors.

'We've seen an increase in demand for information on African cities from across the business spectrum - mining, financial services, airlines, manufacturing, utilities and energy companies,' said Ms Constantin-Metral. 'Many people assume that cities in the developing world are cheap, but this isn't necessarily true for expatriates working there.'

In particular, the cost of good, secure accommodation can be 'extraordinarily high', she said.

Mercer's Cost of Living survey covers 214 cities across five continents and measures the comparative cost of more than 200 items in each location, including housing, transport, food, clothing, household goods and entertainment.

New York is used as the base city for the index, and all cities are compared against the Big Apple. Currency movements are measured against the US dollar.

The cost of housing - often the biggest expense for expats - plays an important part in determining where cities are ranked.