(SINGAPORE) Australian developer Lend Lease beat five other offers with its top bid of $748.9 million for a 1.9-hectare mixed-use site in the Jurong Lake district.

Its bid works out to $650 per square foot per plot ratio (psf ppr) - more than twice the minimum price asked for when the tender for the site was launched two months ago.

Lend Lease, which owns the 313@somerset and Parkway Parade shopping malls here, is expected to build a retail mall on most of the site. 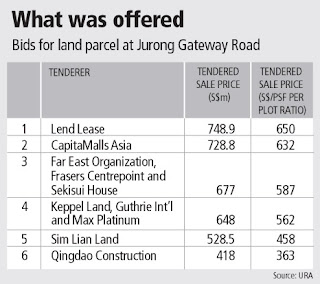 The developer edged out CapitaLand's retail unit CapitaMalls Asia, which made the second-highest offer of $728.8 million or $632 psf ppr. Lend Lease's bid is just 3 per cent higher.

The other bids came from a consortium made up of Far East Organization, Frasers Centrepoint and Japan's Sekisui House; another consortium comprising Keppel Land, Guthrie International and Max Platinum; Sim Lian Land; and China's Qingdao Construction.

Lend Lease's bid is 79 per cent higher than the lowest bid of $418 million, or $363 psf ppr, from Qingdao Construction.

The 99-year-leasehold site, in Jurong Gateway Road next to Jurong East MRT Station, has been on the government's reserve list since November 2008. It was launched for tender in April after an unnamed developer committed to bid at least $350 million, or $304 psf ppr.

The site is the first plot put up for sale in the Jurong Lake area since the masterplan for the area was unveiled two years ago.

The fact that there were six bids shows developers are keen on well-located sites, said CBRE Research executive director Li Hiaw Ho. 'The bids are also a very clear indication of the developers' confidence in the government's vision for the Jurong Lake district and the evolution of the area as a commercial hub in the west of Singapore,' he said.

The plot is classified as a 'white' site, which means it can be put to commercial, residential or hotel use. A mandatory 30 per cent of the gross floor area will have to be set aside for office development, but it is likely that a suburban retail mall will be developed with the remaining 70 per cent of space, analysts said. Lend Lease could also choose to build some apartments.

Colliers International's director for research and advisory Tay Huey Ying said: 'Based on the bid price, the highest bidder is likely to be looking at a development with a predominant retail component to capitalise on the site's location next to Jurong East station, and the large residential and working population catchment of Jurong town.'