DBSS site near Tampines Town Centre up for tender

Located 600m from MRT station, it could add 580 units to housing stock

THE Housing and Development Board has launched a site near Tampines Town Centre for sale under its design, build and sell scheme (DBSS).

A project to be built on the land in Tampines Avenue 5 could add about 580 units to the housing stock. 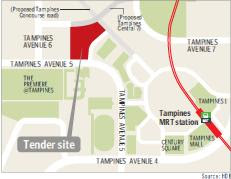 The site, which is adjacent to Singapore's first DBSS project, The Premiere @ Tampines, has a maximum allowable gross floor area of 63,395 sq m, including 1,060 sq m for social and commercial facilities. DBSS projects allow private developers to design, build and sell the homes directly to buyers.

As with HDB flats, the units have 99-year leases and are sold subject to Housing Board rules. Also, 95 per cent of the flat supply is set aside for first-time buyers.

Ngee Ann Polytechnic real estate lecturer Nicholas Mak said the Tampines tender may draw up to seven bidders with offers between $160 and $200 per sq ft per plot ratio. At these prices, the breakeven cost would be about $400 to $450 psf, he said.

It is about 600m from Tampines MRT station and town centre, making it one of the more attractive DBSS plots, he said.

But he believes developers 'should rationally not be too bullish' as the Government will launch two more DBSS sites later this year.These sites are at Bedok Reservoir Crescent and at Upper Serangoon Road. Each will yield about 1,010 units.

More sites for DBSS developments will be made available if there is sustained demand, the HDB said yesterday.

The Tampines tender closes on Aug 3.

Meanwhile, the Urban Redevelopment Authority (URA) has made a hotel site at the junction of Robinson Road and Boon Tat Street available for application. The site includes an 82-year-old neo-classical conservation building, the Ogilvy Centre.

Tenderers can bid for the site on either a 30- or 60-year lease term. The shorter lease term can help lower upfront investment costs, said the URA.