Investment sales of property so far this year have already reached $11.26 billion – surpassing the $10.62 billion totted up for the whole of last year, according to latest figures from CB Richard Ellis.

The property consulting group is now forecasting that the full-year 2010 number is likely to surpass its initial projection of $15 billion and perhaps reach the $17.9 billion mark achieved in 2008. 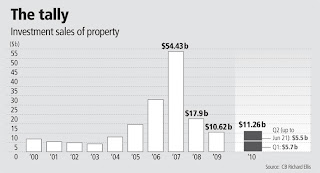 Investment sales of property are often seen as a gauge of the confidence of major players in the sector’s mid- to long-term prospects. CBRE defines investment sales as transactions with a value of at least $5 million, inclusive of apartments and landed residential property, government and private sales of land and buildings, both strata and en bloc. It also includes change of ownership of real estate via share sales.

The $11.26 billion year-to-date number (up to June 21) includes YTD Q2 figure of $5.5 billion, but CBRE expects the Q2 number to reach $6.4 billion to $6.7 billion when the tender for a plum site next to Jurong East MRT Station closes tomorrow and as more caveats for property transactions (of at least $5 million) are lodged for June.

The residential sector has been the star performer of the investment sales market, accounting for nearly $7.7 billion or about 68 per cent of the YTD H1 total tally.

A chunk of this or $2.64 billion was contributed by residential sites sold under the Government Land Sales (GLS) Programme as developers continued to hunger for suburban condo sites.

The collective sales market was also more active in Q2, with six properties sold for residential redevelopment for a total $278.9 million. The most prominent deal was the $95 million sale of Pender Court, which worked out to $1,007 per square foot per plot ratio.

‘In the months ahead, there should be a steady flow of collective sales projects and private land sites being transacted, typically of land parcel sizes less than 100,000 sq ft,’ says Mr Lake.

Credo Real Estate managing director Karamjit Singh too predicts more successful en bloc sales in the second half. ‘While the government will continue to release 99-year leasehold land in the suburbs, there’s a shortage of sites in the mid-prime and prime locations, especially large freehold sites. This can be met by en bloc sales – as long as owners’ expectations are set realistically,’ he said.

Mr Lake points out that ‘a significant new entrant to real estate in Singapore are developers from China who have been active in acquiring sites’.

It started with China Sonangol Land’s purchase of the freehold former Parisian site at Angulia Park from OUE last October for $283 million, followed by a unit of Chinese state-owned enterprise Metallurgical Corporation of China (MCC Group), which bought two 99-year leasehold private residential sites at state tenders this year and Qingdao Construction, which this month clinched a 99-year leasehold condo plot next to Potong Pasir MRT Station for $607 per square foot per plot ratio, a record for the area.

The Good Class Bungalow market also posted robust sales, with 26 properties transacted at $571 million from April to June based on caveats so far.