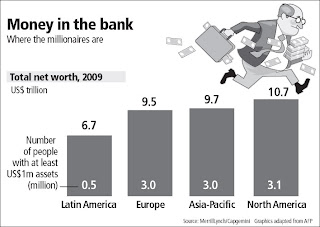 The heaviest concentration of wealth, however, is still in the US

(SINGAPORE) Wealth among millionaires in the Asia-Pacific region has surpassed Europe for the first time, even as the number of millionaires hits parity with Europe.

The latest World Wealth Report by Merrill Lynch and Capgemini found that the size of the Asia Pacific's wealth pie expanded by 30 per cent to US$9.7 trillion. Europe's wealth at US$9.5 trillion saw an expansion of 14.2 per cent.

The number of high net worth individuals hit three million in the Asia Pacific, equal to Europe's number.

The largest concentration of wealth is still in the US with US$10.7 trillion in assets. The number of HNWI (high net worth individuals) in the US at 3.1 million is within touching distance of the Asia Pacific.

In a statement, Bertrand Lavayssiere, Capgemini's global financial services managing director, said: 'The last few years have been significant for wealthy investors. While in 2008 global HNWI wealth showed an unprecedented decline, a year later, we are already seeing distinct signs of recovery, and in some areas a complete return to pre-crisis levels of wealth and growth.'

The report said the Asia Pacific is set to be the 'powerhouse of HWNI growth in coming years', driven by India and China. Last year eight out of 10 countries with the highest growth in HNWI population were from the region, led by Hong Kong with a stunning growth of 104 per cent.

The Boston Consulting Group's recent wealth report named Singapore as the market with the highest growth in millionaire households. Based on BCG data, there were about 122,700 households with at least US$1 million in net investible assets, growing about 35 per cent last year.

Merrill Lynch and Capgemini noted that market capitalisation was a powerful driver of wealth in Hong Kong. Market cap surged 73.5 per cent in 2009, after plunging 50 per cent in 2008.

The territory's market cap to GDP ratio is about 11 times, compared to the global average of 0.8 times. 'That ratio makes Hong Kong particularly vulnerable to losses in wealth when the market declines as it did in 2008, but also produces outsized gains in wealth when stock prices rise.'

India, whose high net worth population grew 50 per cent in 2009, has a market cap to GDP ratio of two times.

In terms of asset allocation, the wealthy showed a preference for stability, reducing holdings in cash in favour of fixed income. Equities' allocation rose from 25 per cent in 2008 to 29 per cent but still falls shy of the 2007 weighting of 33 per cent.

The wealthy in Asia Pacific ex-Japan showed a marked preference for real estate, as investments jumped 56 per cent in the second half of 2009 to US$25 billion.

By the year-end, the allocation to real estate stood at 28 per cent compared to 23 per cent previously.

The region's wealthy also had the highest exposure to residential real estate at 60 per cent.

Meanwhile the study found that the wealthy's investor psyche has shifted towards caution and conservatism. Clients are also more engaged in financial affairs, opting to educate themselves on products, disclosures and investment risks before conferring with advisers.

Capgemini director of financial services solutions Foong Lai Kiun said clients appeared to have regained trust in their advisers and wealth management firms to some degree, but they have yet to regain trust in regulatory bodies that were supposed to monitor markets.

A small number of firms are understood to be seeking to incorporate behavioural finance into their advisory process. But the challenge is to develop a model that is scalable and profitable.