That shrinking feeling gets more acute 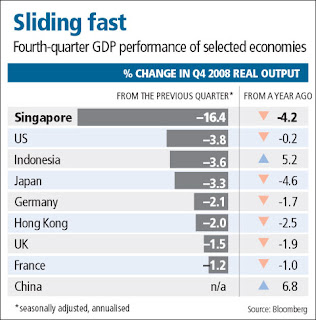 (SINGAPORE) Singapore's economy shrank 4.2 per cent in the fourth quarter, worse than the 3.7 per cent decline estimated last month, as financial services performed even more poorly than expected.
The Ministry of Trade and Industry in its annual economic survey released yesterday said that the financial sector contracted 8.1 per cent, substantially worse than the 1.8 per cent drop forecast in January, on the back of significant declines in trading activities in foreign exchange and stock brokerage, fund management and Asian Currency Units.
On the whole, services producing industries were down 1.3 per cent in the quarter, substantially below the MTI's previous estimate of a 0.1 per cent fall. Services make up roughly 60 per cent of Singapore's $257 billion economy.
Manufacturing - a quarter of the economy - contracted by 10.7 per cent in the three months to December, in line with earlier government estimates.
'The manufacturing weakness story is well known, but the main thing is the speed and severity with which the services sector rolled over,' said OCBC economist Selena Ling. 'When two of your engines fall off, you can't see the economy flying at all.'
The only pleasant surprise came from the construction sector, which increased by 18.5 per cent in the quarter, up from the 14.1 per cent previously estimated.
On a seasonally adjusted annualised quarter-on- quarter basis, Q4 gross domestic product (GDP) declined by 16.4 per cent, the sharpest drop on record. Full year GDP growth came in at 1.1 per cent, marginally below the 1.2 per cent estimated by the MTI in January and sharply lower than the 7.8 per cent growth recorded in 2007.
Manufacturing was down 4.1 per cent for the year, but construction gained 20.3 per cent and services 4.7 per cent, driven by strong growth in the first three quarters of the year.
'Broadly speaking, 2008 was a year to forget,' said Standard Chartered economist Alvin Liew. 'The data revision was minimal. It was already bad but it got a little bit worse,' he said.
DBS Bank, in a note, said 'the minor revision to last year's GDP growth figures has not changed our view on the economy and hence we maintain our 2009 GDP growth forecast at -4.8 per cent.' It had cut its estimates from -3.8 per cent only on Wednesday.
But the latest estimates prompted OCBC to cut its 2009 full year forecast, from -2.8 per cent to -4.8 per cent. 'Frankly, we don't see any light at the end of the tunnel for financial services. It will be the main drag on services,' said Ms Ling. 'And we think consumption will fall off the cliff once we get the retrenchment numbers.'
Stanchart's Mr Liew noted that much of the fall-off in total demand was due to a 9.6 per cent drop in external demand in the fourth quarter. Private consumption expenditure and private sector investment fell by 1.2 per cent and 13 per cent respectively.
'The recovery process - if we see any at all - needs to come from the external sector. If that doesn't recover, we are looking at a very protracted downturn,' he said. Non-oil domestic exports fell 17.8 per cent in the fourth quarter, while total exports were down 12 per cent.
The decrease was sharp over almost all of Singapore's main export markets, with only Indonesia recording a minor increase.
For the whole of 2008, inflation as measured by the consumer price index (CPI) rose 6.5 per cent, compared to 2.1 per cent in 2007, on the back of price increases in housing, food and transport and communications.
The seaonally adjusted overall unemployment rate rose to 2.6 per cent in December 2008 from 2.2 per cent in September 2008 and the decade low of 1.7 per cent a year ago, MTI said.
But labour productivity fell for the second year running, to -7.8 per cent in 2008 from -0.8 per cent in 2007.
OCBC's Ms Ling said unemployment could rise a quarter of a percentage point for every percentage point fall in headline GDP. 'We expect 4 per cent unemployment (from 2.3 per cent in 2008) by the end of the year,' she said.
On Wednesday, DBS said 99,000 jobs could be lost while unemployment may peak at 5 per cent in mid-2010.
Source: Business Times, 27 Feb 2009
Posted by About Singapore Property