Office rents may slide until 2012 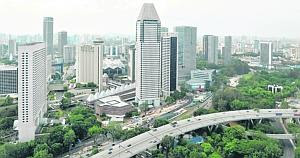 AFTER two years of being squeezed by soaring rents, office tenants are finally seeing the market turn in their favour.
Up to four years of falling or flat rents are in store for them as a wave of upcoming office space outstrips lacklustre demand, according to a new report by property consultancy Savills.
Its Asia-Pacific regional commercial head Chris Marriott expects top-grade office values here to halve from last year's peak by the end of next year, and not start to recover until 2012. Top-tier buildings downtown such as One Raffles Quay and Republic Plaza offer Grade A space.
Rents of such offices are predicted to drop 30 per cent to 40 per cent this year, and a further 20 per cent to 25 per cent next year, he said at a briefing yesterday.
The expected falls are due to the huge volume of new office space to be completed by 2011: 5.5 million sq ft, or about 30 per cent of all existing Grade A space.
At the same time, demand for new offices - which far exceeded supply recently when firms were still expanding - has become anaemic, due to the global economic slowdown, said Mr Marriott.
'Office rents have generally come off by 10 per cent from the peak last year, although for new lettings we've seen more like a 25 per cent drop,' he said.
Average Grade A rents peaked at $15.10 per sq ft (psf) last year and fell to $13.70 psf by the year end. Savills believes they will drop to $6 to $7 psf next year, leaving prime office space here some 20 per cent cheaper than in Hong Kong. Singapore's office market will see a more severe adjustment, partly because the proportion of new space in relation to existing space is bigger, Mr Marriott said.
Other property experts agree that office landlords are in for a tough time.
Cushman & Wakefield managing director Donald Han is tipping a 20 per cent decline in rents this year and another 20 per cent fall next year, although he said the drops may be bigger if Singapore's economic outlook continues to worsen.
In the past three months, most Grade A office landlords have cut rents by up to 10 per cent to 15 per cent, he said. 'Landlords...are becoming more aggressive in trying to keep their tenants happy.'
Still, he notes that even if rents bottom at $7.50 psf - his own forecast - they will remain higher than during the last downturn, when they touched $5 psf.
CB Richard Ellis executive director Moray Armstrong is not expecting rents to correct by so much. 'We have seen in previous cycles that when demand picks up, the available office supply is often very swiftly absorbed,' he said. 'Cycles here have been very short in the past, quite often in the order of two to three years.'
But now, landlords are 'very much prepared to negotiate', said DTZ Debenham Tie Leung's senior director Shaun Poh. 'Some of the landlords have stopped quoting actual prices; now they just ask tenants to make them an offer,' he said.
Existing tenants are also trying to cash in on the recession, Mr Poh said. 'Some tenants who have already settled on a price are asking to renegotiate or to get longer rental holidays.'
But not all landlords are worried. CapitaCommercial Trust, which owns 11 prime properties here, said it is 'not true' overall rents are down sharply, compared to trends in previous downturns. A spokesman said the trust charges $15 to $17 psf for Grade A space, while its overall average rent is 'only $7.44 psf'.
'We...expect to see positive rental reversions for leases renewed in 2009.'
-------------------------------------------------------------------------------------------------
Tenants rethink pre-booked space
THE credit crunch is forcing major tenants in Hong Kong to scale down ambitious plans to take up more office space there.
Property consultant Savills said yesterday at a press conference at SGX Centre1 that these tenants are unlikely to proceed with all the space they have booked.
The global credit crunch has battered many major financial institutions in the past year.
The firms mentioned by Savills included big names such as Credit Suisse, Deutsche Bank and Morgan Stanley. They had been due to move into the Hong Kong International Commerce Centre upon its completion next year.
Consultants say this hesitancy to take up pre-committed space has yet to occur in Singapore but it may happen in the months ahead.
Mr Moray Armstrong, executive director at property consultancy CB Richard Ellis, said: 'It's not a stretch to expect that to happen here, given that many of the pre-commitments were made by financial institutions.' He also said these institutions may choose to sublet space they cannot occupy.
This might be seen at the new Marina Bay Financial Centre, set to be ready in 2012. All three towers of prime GradeA office space have been at least partially pre-leased. Tenants include American Express, BHP Billiton, DBS Group Holdings, and the Macquarie Group.