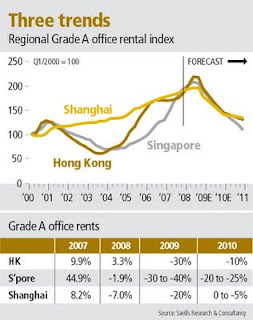 Rental recovery here can be seen from 2012 onwards

(SINGAPORE) Grade A office rents here could fall 30-40 per cent this year and another 20-25 per cent in 2010, based on new research from Savills.

Rents here fell 1.9 per cent in 2008, the property firm said. Savills' research, which also forecasted rents at competing markets Hong Kong and Shanghai, shows that Singapore will be the worst-hit - in terms of rental declines for Grade A office space - in 2009 and 2010.

Property firms have said in December 2008 that Singapore's Grade A office rents nearly doubled in 2007 after growing by more than 50 per cent in 2006.

But now, rents in Hong Kong are higher again as rentals here took a big hit in 2008. According to CB Richard Ellis, for example, Grade A rents fell to an average $15 psf pm in Q4 2008 - a fall of 12.5 per cent from end-2007. CBRE and Savills use different baskets of properties to calculate market rents. But both firms expect rents to fall further in 2009 and 2010 on the back of new supply.

Singapore and Hong Kong rushed to develop offices for their rapidly expanding financial services sectors in the last few years. Now, with the global downturn, an excess of unwanted space is depressing rents.

But Hong Kong's rents are expected to take less of a hit as new office supply there was rolled out earlier than in Singapore.

'With a minimum of a four year lead time for any significant office development, Hong Kong's core supply arrived in the nick of time to satisfy the burgeoning demand whilst Singapore has been caught by the unforeseen credit crisis,' said Chris Marriott, Savills Asia-Pacific's regional head of commercial.

Some 5.5 million square feet of new prime office space is due to come up in Singapore from 2009 to 2011 - about 30 per cent of existing supply, Savills said.

By contrast, Hong Kong has a smaller 4.52 million sq ft of office space coming up, which will add 6 per cent to the total stockpile.

Mr Marriott expects Hong Kong to see the quickest recovery among the three markets studied. For Singapore, rental recovery could be seen from 2012 onwards, he said. But investor interest is expected to pick up by early 2010.

There are a number of new funds with allocations for Asia which are already targeting assets regionally. Mr Marriott said: 'These institutions are already focusing on prime assets in core markets at discounts.'

In particular, they are looking at Australia, Japan, Korea, Hong Kong and Singapore, and will start buying once vendors reduce their prices, he said.