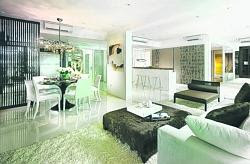 (SINGAPORE) Developers have achieved an 18-month high in private homes sold in a month, with the 1,000-unit mark having already been breached so far in February.

Most of the developers who are prepared to pare their price expectations to more affordable levels continue to be rewarded. A near 10 per cent price chop was all it took for GuocoLand to sell off almost 90 per cent of the 182 units at The Quartz condo in Buangkok relaunched last week.
The Singapore-listed property arm of Malaysian tycoon Quek Leng Chan has found buyers for about 160 units since last Tuesday's price cut. This means the 625-unit project is now left with only around 20 units, compared with 182 units prior to the relaunch.
GuocoLand trimmed the 99-year-leasehold project's average price to $595 per square foot (psf), compared with $650 psf during the height of the market in 2007.
Besides the more competitive pricing, market watchers attributed the successful outcome to the fact that The Quartz will be ready for occupation soon. Temporary Occupation Permit (TOP) for the condo is expected in a couple of months.
The bulk of buyers are believed to have bought for their own occupation. About 98 per cent of buyers are Singaporeans, 80 per cent of whom live in the vicinity, mainly with HDB addresses, a GuocoLand spokeswoman said.
'They like the design, layout and location of the development, which is near Buangkok MRT Station and also accessible by Kallang-Paya Lebar Expressway,' she added.
The bulk of the 182 units were three-bedroom apartments. On average, a typical three-bedder of slightly under 1,100 sq ft costs around $650,000, BT understands.
Over at Jurong Lake District, Frasers Centrepoint found buyers for another 35 units for its Caspian condo over the weekend, raising total sales in the 99-year-leasehold project to 515 units.
The overall average price achieved is just over $600 psf, reflecting the sale of better-facing units in the past week. About 32 per cent of Caspian's buyers have opted for an interest absorption scheme; they will pay 3 per cent more in exchange for not having to foot beyond the 20 per cent initial payment until the project receives TOP. On average, three-bedroom units at Caspian cost $700,000 to $750,000.
At River Valley Road, Fortune Development found buyers for another six units at RV Suites over the weekend. Half the 96 units in the freehold project have been sold. The project comprises mostly units of 500-550 sq ft, and the average price is about $1,300 psf. East Coast Properties sold another four units over the weekend for its D'Chateau @ Shelford, which is priced at $1,000-$1,100 psf on average.
Market watchers note that over at Livia in Pasir Ris, some of the 30 units released at $620 psf on average on Valentine's Day weekend are still available. Units are relatively large (a typical three-bedder is about 1,259 sq ft), resulting in a bigger unit price quantum of at least $750,000 for a three-bedroom unit. Potential buyers may also be waiting for new projects to be launched in the area before deciding on their purchase.
Seasoned property consultants say that for mass-market projects to move today, they should be priced at around $600 psf at most, and the unit price should not exceed $700,000, in order for them to be affordable to HDB upgraders.