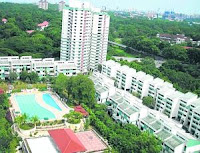 Appeals court rules that only 80% consent required for collective sale

THE sale of Gillman Heights has been given the final green light, after Singapore's highest court dismissed a last-ditch plea by minority owners to overturn the sale.
This marks the end of the two-year en-bloc saga which began when buyers CapitaLand, Hotel Properties and two private funds inked a $548 million deal to buy the 607-unit, 99-year leasehold estate in Alexandra Road in 2007.
Majority owners yesterday heaved a sigh of relief, while minority owners told The Straits Times they were 'disappointed, but not surprised' at the decision.
The Court of Appeal's verdict, delivered to a packed courtroom yesterday afternoon, clarifies some ambiguity in the laws surrounding collective sales of former HUDC estates.
Senior Counsel Michael Hwang, acting for the 10 minority owners, had argued in the appeal's hearing last Tuesday that Gillman Heights needed 90 per cent level of consent because it received its certificate of statutory completion (CSC) and temporary occupation permit (TOP) only in 2002.
This document is usually used as a reference to determine the age of an estate, which in turn, determines if 80 or 90 per cent level of consent is required for a collective sale. If the development is more than 10 years old, it needs 80 per cent, 90 if it is less than that.
At Gillman, about 87.54 per cent of owners signed on to the en-bloc sale. A 90 per cent requirement would mean the sale could not go through.
The estate, although physically completed in 1984, received its CSC and TOP only in 2002
because it had began its privatisation process in 1996.
Prior to that, it did not need a CSC or TOP because it was not private property.
Mr Hwang argued that the law would have made a provision for HUDC estates if it did not mean for the usual requirements to apply.
However, Chief Justice Chan Sek Keong yesterday dismissed this, saying that there had been a 'drafting flaw', as a literal interpretation requiring the use of CSC and TOP would have defeated the purpose of the collective sale laws.
This purpose was to promote the rejuvenation of old estates, and the laws apply to all strata developments, which by definition included privatised HUDC estates, he said. He agreed with a previous High Court ruling that Gillman needed only 80 per cent.
The sale of Gillman Heights was approved by the Strata Titles Board in late 2007, but minority owners have fought the sale at every turn, appealing STB's decision at the High Court, and when this failed, to the Court of Appeal.
One minority owner, Mr Kok Chong Weng, said yesterday: 'It's sad we have to lose our homes, but we weren't surprised by the decision.'
He estimates that total costs of fighting the sale would be more than $300,000 for the minority owners.
'The costs are high, but we wanted to see the final card and hear it from the highest authority,' he said.
Another minority owner who declined to be named pointed out that if they had not appealed last year, while the market was still registering high property prices, they would have been unable to buy a replacement unit with the sale proceeds.
Prices have since fallen, so they are now better placed to buy replacements.
Majority owners, on the other hand, were relieved at the conclusion of Gillman's long drawn-out collective sale.
Its sales committee chairman Robert Wiener said: 'It's been in limbo for a long time, now it's finally ended.
'It's a huge relief for many owners who had bought second properties and were really worried.'
The sale will now take about three months to compete, and all eyes are on how the CapitaLand-led joint venture will redevelop the estate.
Analysts that The Straits Times spoke to speculated that the developer might put the estate on the rental market while the property market is in the doldrums.
Knight Frank director of research and development Nicholas Mak pointed out that the sale price of each unit - about $870,000 to $950,000 is still 'pretty attractive', especially with the current downturn.
Source: Straits Times - 10 Feb 2009
Posted by About Singapore Property