Five stations on Circle Line to open in May 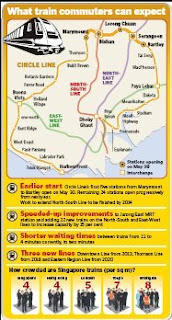 RESIDENTS in areas such as Lorong Chuan and Bartley Road will have an MRT station at their doorsteps a tad earlier than expected.
Circle Line Stage 3, which has five stations, will open on May 30 instead of June, Transport Minister Raymond Lim announced in Parliament during yesterday's debate on his ministry's budget.

The remaining 24 stations on the new line will open progressively from next year, helping to reduce crowding on the existing MRT lines.
When completed, the Circle Line will take about 10 to 15 per cent of commuter trips from existing lines.
'(It) will help commuters save travel time, by reducing the need to make detours into the city centre to transfer across MRT lines,' said Mr Lim.
The five stations that will open are Marymount, Bishan, Lorong Chuan, Serangoon and Bartley.
Bishan will be the interchange station for the North-South line and Serangoon, the North-East line.
Student Jerald Seow, 15, who lives near Bartley Road, was among those who jumped with joy yesterday on hearing the earlier opening date.
He now takes a 25-minute bus ride to Paya Lebar MRT station and hops on a train to get to town on weekends.
'When Bartley station opens, I can take a train to Bishan MRT instead. It will be a lot more convenient,' he said.
The Circle Line is among $40 billion worth of rail projects that will double Singapore's rail network.
Besides adding new rail lines, the Transport Ministry is also intent on reducing waiting time along existing lines, which introduced 900 extra train trips a week last year.
One major move is the purchase of 22 new trains, to be delivered in 2011.
Another is to expand Jurong East MRT station, where there is a bottleneck.
Trains arriving there from Bukit Batok now have only one platform and track to stop at before they turn around. A second train will have to wait for the first to leave before it pulls into Jurong East.
A project to add another platform and track will be completed by 2011 instead of 2012, said Mr Lim.
The changes to Jurong East station and the new trains will cost $800 million in all. They will help boost carrying capacity along the North-South and East-West lines by 15 per cent and slash the waiting time between trains to two minutes in 2011 from the current 2.1 to 4 minutes.
It is not possible to go lower than two minutes, the ministry said, as the signalling system on the North-South and East-West lines cannot support a shorter time between trains.
Yet another project that will come onstream earlier is the extension of the North-South MRT line to Marina South. It will be completed a year earlier, in 2014.
Meanwhile, trains are likely to be more crowded as public transport ridership grows, before relief arrives in 2011.
Overcrowding on trains was raised by Madam Cynthia Phua (Aljunied GRC).
Responding, Mr Lim said the crowding level is still below what is acceptable.
At their most crowded, trains here carry an average of 1,300 to 1,450 passengers, compared to the Land Transport Authority's standard of 1,600 passengers.
They are also less crowded than trains in other cities. Singapore's trains pack in four people per square metre, which is similar to those in Hong Kong but lower than London's (five people) , Tokyo's (seven) and Shanghai's (eight).
Parliament sitting continues today, the last day of the nine-day Budget debate.