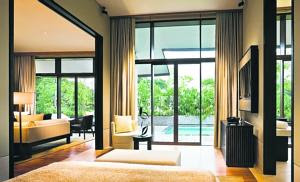 Ultra-luxe hotel Capella Singapore is the seventh hotel on the resort island, but experts say there is no overcrowding of rooms

Sentosa's latest hotel - the ultra-luxurious Capella Singapore - opens next month, bringing to seven the number of hotels on the small, 500ha island.
The $400-million hotel designed by renowned British architect Norman Foster is set to be the jewel in Sentosa's crown, with its distinctive figure-eight shape wrapped around two grand colonial buildings restored to their former glory.

It will have 111 rooms from a selection of suites, villas and what the Capella people call 'manor' houses.
Given that the resort island already has 1,200 hotel rooms, and with at least 1,650 more to come within the next three years, it begs the question: Is Sentosa in danger of being 'hoteled'-out?
No, say industry experts who point out that the various hotels cater to different markets.
For example, Capella Singapore's luxury rooms with villas and manors are the first of their kind on Sentosa, says Mr Philip Lim, director of hospitality and tourism training academy, The Tourism Academy@Sentosa.
'It will be clearly differentiated from what is already available,' he says. His training institute is a collaboration between Temasek Polytechnic and Sentosa operator Sentosa Leisure Group and offers diplomas in hospitality and tourism business.
Capella Singapore's market is very high-end: Room rates start from $750 and go up to $7,500 - the priciest on the island.
Sentosa's other hotels cater to either those on a budget, making them popular with families, or the upmarket crowd who can splash out but not to the level of Capella's luxe lot.
Hotels in the first category are the Costa Sands Resort (Sentosa), Siloso Beach Resort and Treasure Resort. Prices start from $80, $260 and $288 for a night respectively.
Those belonging to the latter category are the five-star Rasa Sentosa Resort and The Sentosa Resort & Spa, and the boutique resort, Amara Sanctuary Resort Sentosa. Prices start from $375 at Rasa Sentosa, $380 at The Sentosa Resort and $500 at Amara Sanctuary.
Mr Goh Lye Whatt, Sentosa's director of property and planning, points out that the island's hotels and resorts are popular among a diverse group, from families on getaway vacations to business travellers and holiday-makers on extended stays.
He adds that as part of Sentosa's master plan, these hotels were planned for the long haul in line with more tourism initiatives and to bring a wider range of offerings to meet the needs of travellers.
Singapore Tourism Board's director of hospitality division Caroline Leong says 'the wider range of offerings will better position Singapore to meet the accommodation needs of travellers'.
Indeed, Mr Albert Teo, chief executive officer of Amara Holdings which owns Amara Sanctuary, is unfazed by the opening of Capella Singapore. He says that with Capella's additional 111 rooms, 'it's not that many to Sentosa's total room count'.
Capella Singapore also offers extended stays that can be as long as 20 years. 'It is catering to a niche market that is different from ours,' says MrTeo of his 121-room hotel. He says Amara Sanctuary is meeting its targeted occupancy rate but declines to elaborate.
As well as the lavish Capella Singapore, built over nearly six years, Sentosa will have several more hotels opening over the next few years.
Singapore's first of two integrated resorts, Resorts World at Sentosa, is expected to open in March next year. Four of its six hotels will be open by then, offering 1,400 rooms.
Property giant City Developments is also developing a 250-room hotel at Sentosa Cove, which it says will be ready in 'two, three years'. It was originally reported to be a W hotel (part of the hip W hotel brand), but a spokesman says it will unveil the name at a later stage.
But that is a long way off. Right now, the buzz is all about Capella Singapore, the flagship property for Capella Hotels and Resorts in Asia.
General manager Michael Luible says it has been receiving bookings since January and 'now has a healthy number of advance bookings'. These include room bookings by corporate travellers,
individuals and families.
Mr Lim says whether Sentosa can take more hotels will depend on the demand 'when the economy is back in its healthy state and when all hotels including those in Resorts World are ready'.
Mr Luible says consumers benefit from more options on Sentosa as the island provides a wide range of lifestyle and hospitality choices for various budgets and needs. But other than those already planned for, he prefers 'to see no further hotel developments on the island, to preserve its natural beauty'.

-------------------------------------------------------------------------------------------------
Stay for 20 years? Sure
The drive to the latest hotel to open on Sentosa provides a snapshot of the resort island's history.
At first, visitors encounter the future: the sprawling construction site for the upcoming Sentosa casino, Resorts World.
After that, nestled on a hill, they come upon both past and present combined: two massive, newly restored colonial buildings that form the centrepiece of ultra-luxe Capella Singapore.
The two-storey buildings, which the British called Tanah Merah, were built in the 1880s by the British military as recreation and entertainment centres for officers.
British architect Norman Foster, who designed the Capella Singapore, restored the buildings, with their white columns and red terracotta tile roofs, to their former glory.
Tanah Merah house the hotel's guest arrival area, the general manager's office, a guest library, a fine-dining Chinese restaurant called Cassia and other facilities.
The hotel has 111 guestrooms including 61 deluxe rooms, 11 suites, 38 garden villas and a presidential manor, spread over 12ha of land.
It also offers an extra 72 sea-facing suites and duplexes, nine 'manors' with private pools and a colonial house for guests who want to stay long term. And by long term, the hotel really means that -
as long as 20 years if desired.
Capella Singapore stands on what was previously a rainforest. A spokesman for the hotel says that for every tree that was felled, five were replanted. The result is a hotel that is surrounded by lush greenery.
For the record, there are more than 5,000 trees, 2,000 palms, 700 bamboo trees, 40,000 ferns and 125,000 shrubs.
The trees also become privacy screens, especially around the villas, which come with indoor and outdoor shower areas.
Guests will also be amazed by the size of the hotel rooms, which are said to be the largest in Singapore.
Room sizes start from a spacious 77sqm instead of the average 42 sq m. Capella's biggest guestroom is the Capella Manor, which is 434sq m. Rates range from $750 a night to $7,500.
It is not just the size of the rooms that will wow guests. The rooms, with their large windows, offer unblocked views of the surrounding greenery and the South China Sea.
Room interiors were designed by renowned Indonesian designer Jaya Ibrahim, and they boast a soothing neutral colour scheme of beige, white and brown.
To house some of the guestrooms, Lord Foster designed a new building, shaped in the auspicious figure of eight, unlike modern buildings which usually resemble a massive block.
The old and new of the hotel blend seamlessly. For example, the louvres of the new building, which provide shade, echo the louvre windows of Tanah Merah. The choice of roof colour for the new building, a red-brown shade, matches that of the terracotta roof tiles of the old buildings.
Of his design, Lord Foster says in a statement that 'Capella Singapore is seamlessly integrated with the beauty of its natural setting and the historic buildings on the site'. He adds that the design fuses the contemporary with the historic.
This is his first hotel project here, but the 73-year-old is no stranger to Singapore. His other works include the Expo MRT Station and the new Supreme Court, both of which boast a spaceship-like design.
On the international scene, he designed Terminal 3 of the Beijing Capital International Airport and the gherkin-shaped Swiss Re office tower in London.
A winner of the renowned Priztker Architecture Prize, he is known for his clean, environmentally aware designs.