CDL cuts prices of Livia units by about 5% 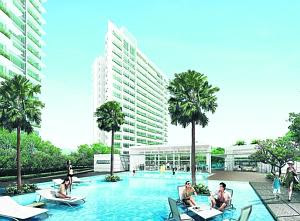 CITY Developments (CDL) plans to launch 30 units of its 724-unit Livia condominium project in Pasir Ris at an average of $620 per sq ft, about 5 per cent or $30 psf below the initial launch price last July.

The sale of the 30 three- to four-bedroom units starts tomorrow. Another 30 apartments may be released at the same price later.

The developer will not be compensating earlier buyers for the price difference, given that the market has taken a big turn for the worse.

'This adjustment in the long run will be better for everybody,' said a CDL spokesman. The area's values will rise in future as new developments are completed, he said.

CDL's group general manager, Mr Chia Ngiang Hong, said the company had held back from selling new phases of Livia because of poor market conditions in the light of economic uncertainty.

The change of mind is due to revived interest being expressed by visitors to the development's showflat, he said.

'The company senses a renewal of market interest and improvement in buyer sentiment. More people have been visiting our showrooms, and many have made offers for units that have yet to be launched,' said Mr Chia.

The re-pricing of Livia units comes swiftly after the preview success of mass-market condo Caspian in Jurong West. Frasers Centrepoint has already sold 350 units of its 712-unit condo since last Thursday. The project was initially priced at $580 psf on average.

Livia met with a favourable response when it was released in July last year, with buyers scooping up 160 units of the first 200 apartments released in just a few days. CDL has so far released 360 units and sold 340, leaving 384 units available for sale.