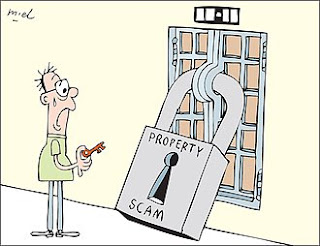 'Secret profit' case sheds some light on the agent-agency relationship

THE world of Singapore real estate can seem all too murky to many, with opaque institutions and questionable deals.
There is no one single authority - either from the industry or the Government - with enough clout to decide who gets to ply the trade and who gets kicked out because of wrongdoing.
The regulatory vacuum means common practices that raise eyebrows are never discussed and analysed with a clear resolution. Questions like 'Should an agent get a commission from both the buyer and seller?', or 'Should an agent be allowed to buy property from his seller?' elicit robust views from both sides.
Earlier this month, we came a bit closer to getting some answers after a couple took housing agency ERA Realty Network to court over the conduct of their agents.
Mr Yuen Chow Hin and Madam Wong Wai Fan, who sold their downtown apartment for $688,000 in 2007, learned subsequently that their home was bought and resold almost immediately by the wife of their agent's boss for $945,000.
They claimed a conflict of interest and sued ERA for $257,000 - the difference between the two sale prices and about $7,300 in commission.
High court judge Choo Han Teck agreed with the couple and ordered that $257,000 be returned to them. ERA has indicated that it may appeal against the ruling.
The case was significant not because a housing agent had been found 'flipping' a property.

Professional agents often invest in property themselves, sometimes buying directly from owners
they represent. Rather, the case was valuable for the public nature of the disclosures and resolution.
Whether such 'flipping' by housing agents can be considered ethical depends on each transaction.
But the line between what is right and wrong has never been drawn clearly because of the freewheeling nature of the industry.
Buyers and sellers who seek a clear resolution are forced to turn to the courts, but many often do not have the stomach, cash or legal muscle to do so. They fight shy of the stress of legal proceedings and settle away from the public eye, leaving other buyers and sellers none the wiser.
The Yuens didn't. This case let the public hear - for the first time in recent years - a large, well-established property firm argue that it is not liable for the actions of its agents because they are considered independent contractors.
The statement may sound surprising to many buyers and sellers who often hire an agent based on a firm's reputation. But the reality is that all agencies - not just ERA - hire agents as independent contractors and take a cut from their commissions. In return, the firms offer agents infrastructure and administrative support.
In the agent-agency relationship, the former has the upper hand because the departure of a star can hit the bottom line.
In the cut-throat world of real estate agencies, losing a top performer could mean also losing hundreds of agents working under him to a rival agency.
It means most property firms are loath to let top performers go, even if they are caught red-handed for unethical practices.
In 2006, for example, veteran ERA agent Syed Abdullah Alhamid was jailed for a month for being part of a scam which helped flat buyers secure loans with fake documents. He returned to ERA not long after being released from jail.
In the Yuens' case, Justice Choo was blunt in rejecting ERA's assertion that it was not liable, given that the transaction documents and advertisements gave the impression that the agents had the backing of the agency.
The fallout from the disclosure of ERA's 'independent contractor' argument is considerable.
It begs these questions: What does it mean when a large, well-established company claims to have a solid reputation, high service standards, and a good track record? How much value can someone place on such assertions, if the 'independent contractor' argument can be pulled out of the hat when things go wrong?
Justice Choo's judgment aside, the case was invaluable for helping to shake the average buyer and seller out of their complacency.
Singaporeans tend to forget that the clear rules and strong institutions they are so used to in their daily lives do not apply in the property industry. The safety nets are so small and legal recourse so fragile that the best bet one probably has is to pick the right agent in the first place.
It doesn't help that rivalry between different factions makes self-regulation near impossible.
The Institute of Estate Agents, formed in 1998 to try to centralise control over agents, has only a small fraction of the more than 20,000 agents in the industry on its membership roll. Since membership is not compulsory, it has no power to keep errant agents out of the industry.
Meanwhile, there is confusion over what it takes to be an accredited agency.
The voluntary Singapore Accredited Estate Agencies scheme, when launched in 2005, required accredited housing agencies to have all their agents pass the Common Exam for House Agents (Ceha) by this year. Last year though, it introduced a scaled-down test, the Common Examination for Salespersons (CES), after feedback that the Ceha was deemed 'too academic'.
This left many agents at a loss over which qualification to try for as it was not clear if Ceha was still necessary for a housing agency to get accredited.
Meanwhile, the Consumers Association of Singapore says it has been in talks with various government agencies to work on yet another accreditation scheme. Whether that - when it takes shape - will be made compulsory remains to be seen.
Until something concrete comes about, laymen will still have to rely on property owners with deep enough pockets to fight court cases for their answers.