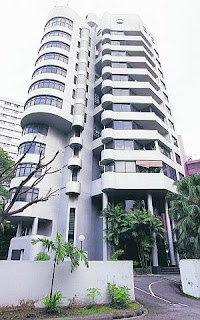 Developer cites poor market conditions for 11th-hour decision
A DEVELOPER has backed out of a planned $44 million purchase of an enbloc sale site in the prime Cairnhill area at the 11th hour - sparking anger from some of the home owners.
The firm, Jewel 1, blamed 'difficult, uncertain and deteriorating market conditions' for its decision to pull out of buying Cairnhill Heights.
The move came just 20 days before the deal to buy the 19-unit condo was due to have been completed on Feb 24, the condo's sales committee said yesterday. The developer, wholly owned by one shareholder, will have to forfeit its 5 per cent deposit of $2.2 million.
'This really feels like a stab in the back. Where is the good faith?' said one owner, also a sales committee member, who declined to be named.
The decision came despite a protracted legal battle in which Jewel fought for the right to buy the site.
The developer outlined its decision in a letter to the lawyer involved in the proposed sale.
Three sale committee members told The Straits Times they felt let down by the developer, as they regarded the firm as a partner in a deal that they had robustly defended against all challenges, believing it was a reputable property developer.
Jewel 1, which was registered in 2006, has only one shareholder and director - Mr Cheong Sim Lam. He was not available for comment.
Mr Cheong's family owns Hong Fok Realty, and he is the uncle of SC Global chief Simon Cheong.
He had agreed to buy Cairnhill Heights in May 2007, at the height of the property boom and amid a frenzy of collective sale deals.
The Strata Titles Board granted the sale in March last year. An objector at Cairnhill Heights then took the case to the High Court but lost the appeal in November.
A sale committee member who wished to remain anonymous said: 'Having been on the same side
for almost two years now, sometimes fighting shoulder-to-shoulder to secure the sale, the last thing you would have expected is for your contracting party to turn around and leave you in the lurch.'
The sale committee said it has reserved all options in terms of possible legal recourse.
Owners of the 19 units will get their share of the forfeited deposit, after deducting for expenses, which are still being calculated.
If the sale had gone through, each owner would have received $1.97 million to $2.5 million, apart from the sole penthouse owner, who would have pocketed $5.5 million.
About half of the owners have rented out their units. One of the owners lives there but also own properties elsewhere in Singapore.
At least one owner is believed to have already bought a replacement property - assuming the full sale price would soon be paid - and is now stuck with two homes.
One owner, businessman Georg Mechtler, said: 'We felt aggrieved, having committed for more than two years to sell this property while the market kept climbing. Now, we have missed all our selling opportunities of this cycle. And the buyer only forfeits a miserable 5 per cent.'
Still, not all owners are upset. One said she is happy that an architectural icon has been preserved. Cairnhill Heights was designed by Singapore- based architect Geoff Malone.
'We should keep evidence of our architectural heritage,' she said.
Source: Straits Times, 20 Feb 2009
Posted by About Singapore Property