Punggol to get green makeover 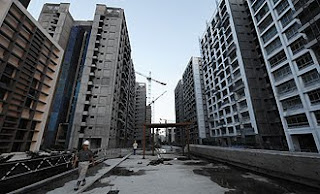 THE former sleepy fishing village of Punggol is to undergo a green makeover that will transform it into Singapore's first 'eco-town'.

National Development Minister Mah Bow Tan said on Wednesday that the northern coastal town is to serve as a testbed for innovative green technologies.

Testing such technologies at Punggol will allow the Housing and Development Board (HDB) to lower the implementation cost of these solutions and to replicate them across other towns, he added.
The HDB sees Punggol, one of Singapore's younger towns, as being ideally placed to undergo the planned transformation.

A waterway is being built at Punggol that will feature green landscapes and bring nature closer to residents.
The town has small, intimate estates featuring common green areas, accessible amenities and a well-integrated public transport network.

The HDB hopes the town's green living environment will raise awareness of environmental sustainability.
To bring about Punggol's revamp, it will be working with government agencies and private sector firms in the areas of energy, waste and water management.

The HDB is adopting a three-pronged approach to the development of the eco-town.
This will involve implementing effective urban planning designs that encourage residents to adopt greener lifestyles, using green technologies and educating residents through grassroots events.
Speaking to a 500-strong audience yesterday at an HDB-hosted housing conference at Suntec City, chief executive Tay Kim Poh said the HDB viewed such investment as being in line with its goal of providing a higher quality of life for residents.

'As the largest developer in Singapore, we have the responsibility to promote environmental sustainability,' he said.

He added that in recent years the HDB had been driving a number of initiatives to combat climate change.
It is introducing solar systems at four precincts - Tampines, Bukit Panjang, Tanjong Pagar and Marine Parade - with a combined capacity of 600 kilowatt-peak that will be used to offset the energy consumption of the towns.

Mr Tay underlined the importance of constantly rejuvenating ageing towns, and said HDB intends to extend to all towns its Remaking Our Heartland urban rejuvenation programme for public housing estates.

Over the next 20 to 30 years, this massive programme will revitalise older towns and estates, he said.