Among the top foreign buyers of private homes last year, Asians (excluding Indonesians) primarily bought units in the $500,000 to $1 million range, while most Western buyers (Australians, UK and US citizens) picked up homes mostly in the $1.5-5 million range.

Indonesians were in the same category as the Western buyers, with the $1.5-5 million range being their most favoured price band. In fact, 47 per cent of the 1,219 caveats for private homes lodged by Indonesians last year were in this band, shows Jones Lang LaSalle’s analysis of URA Realis caveats. 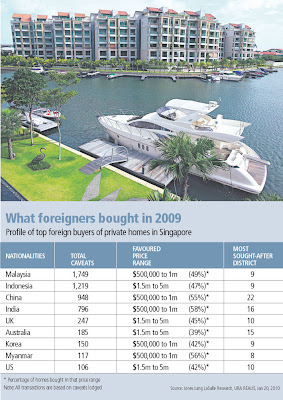 On the other hand, Malaysians, mainland Chinese, Indians, Koreans and Burmese were more likely to have bought a private home last year in the $500,000 to $1 million category.

DTZ executive director (consulting) Ong Choon Fah argues that Indonesians tend to buy a property here as a home away from home, often as a residence for their children studying here, and as a safe haven to park their wealth in a nearby country. Hence they are prepared to invest more for a property in Singapore.

Generally, though, Asians may set aside smaller budgets for their property investments in Singapore because they also compare property prices here relative to their home markets, Mrs Ong suggests.

JLL’s South-east Asia research head Chua Yang Liang observes that while there is no noticeable difference in the location (district) preference between Asian and Western foreign buyers, there is a more prominent difference in terms of their price range. He suggests that this could be because the majority of Western foreign buyers are probably here on expatriate terms, while Asian buyers are likely to be working here under local terms or are just investors.

Mrs Ong suggests that Asians may be more ‘adventurous’ and prepared to shop for a property in Singapore’s suburban locations, where deals below $1 million can still be found, whereas Western buyers may be more comfortable sticking to their traditional investment locations such as Districts 9 and 10 where expats have traditionally lived and property is pricier.

However, property market watchers point to a stronger presence by mainland Chinese in the higher-end property market in Singapore. JLL’s analysis shows that they picked up 22 properties exceeding $5 million apiece last year. Most of their purchases in this price band were in Districts 10 and 4. District 4 includes Sentosa Cove, while District 10 is one of Singapore’s traditional prime districts covering such locations as Ardmore Park, Cuscaden Road and the Nassim area.

JLL’s caveats analysis showed that foreigners’ share of private home purchases increased to 27 per cent in Q4 last year, from a low of 15 per cent in Q1 2009, when the property market was still eschewed by foreign investors who had gone into hibernation in the aftermath of the global financial crisis. Foreigners lodged 20 and 23 per cent of caveats in Q2 and Q3 last year.

Their relatively low share in the first two quarters of last year dragged down their full-year share to 21.8 per cent from 24.1 per cent in 2008. However, in absolute numbers, the number of private residences bought by foreigners doubled from 3,176 in 2008 to 6,472 last year, amid the spectacular overall recovery in private home sales following price cuts by developers in the earlier part of last year. As well, investors soon developed a preference towards investing in property as an asset class after the global financial slump when billions vaporised overnight in investments in financial instruments.

Dr Chua forecasts that foreigners will continue to be active in the local property scene this year as the regional economies improve.