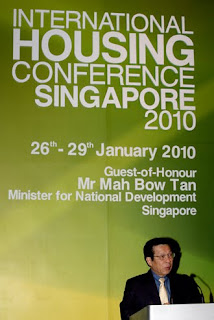 THE Housing Board is embarking on a review of its rules to ensure that property speculators are not abusing the system - and driving up flat prices.

It will check if any rules are 'encouraging or allowing' people to speculate on HDB flats, said National Development Minister Mah Bow Tan.

At the same time, it will step up efforts to make sure people do not get away with abusing the system.
Some disgruntled homebuyers, priced out of a rising market, worry that some HDB buyers are exploiting the rules to try to make a fast profit.

They claim these speculators snap up flats on the resale market and then either rent them out illegally or sell them legally after the stipulated one-year period.

Under HDB rules, citizens and permanent residents who buy resale flats without housing grants or HDB loans must live in the flats for at least one year before selling, or at least three years before renting out the entire flat.
Speaking on the sidelines of a housing conference hosted by the HDB on Wednesday, Mr Mah said these claims were worth checking and he wanted to ensure that such factors were not inflating the market artificially.
He said it would not do if buyers were buying flats because they hoped to make money through flipping or selling the flats later on, or by renting them out without living in them.

He did not know how prevalent such practices were, but added that 'anecdotally, you do hear cases, so I want to make sure that this is not happening'.

The HDB's findings will be out in a couple of months, he said.

Industry observers said that if there were speculators, they would be less likely to be flipping HDB flats - reselling them quickly - and more likely to be renting them out.

'HDB flats in good locations enjoy very high rental yields, up to 7 or 8 per cent. Even if owners are not legally allowed to rent out their whole flat, you hear of creative cases where they do so anyway,' said ERA Asia Pacific associate director Eugene Lim.

Agents said an owner might lock up a room to make it seem he is still living there, even though he has rented out the entire flat.

Chesterton Suntec International research and consultancy director Colin Tan said this has gone on for years, but these cases were hard to prove and needed a major effort to enforce.

Latest HDB figures showed the median cash amount paid by buyers for resale flats over and above a flat's valuation, known as Cash-over-Valuation (COV), doubled to $24,000 in the last three months of last year compared to the previous quarter.

Resale flat prices also rose 3.9 per cent in the final three months of last year to hit a fresh record, taking the full-year jump to 8.2 per cent.

Mr Mah said the Government did not wish to meddle in the resale market, and COV payments were part and parcel of the market.

'The buyer might be happy today, but tomorrow he's a seller and if we set the prices of what he wants to sell, he'll be unhappy.

'Let the price be set by willing buyers and willing sellers. We don't, and should not, interfere in the resale market.'

Mr Mah also downplayed the impact of permanent residents on the resale market.

'Our numbers show that the PRs are buying about 20 per cent, or one in five flats sold. So yes, they do have some impact, but they don't have such a great impact,' he said.

Asked if PRs should be restricted from buying in the resale market, Mr Mah said that was not the right thing to do.

PRs also need a place to live, he said, and the solution was to make a clear distinction between Singaporeans and PRs in terms of the grants they get.