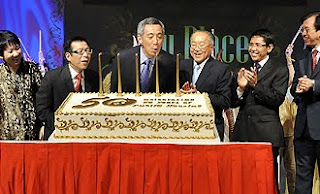 WHILE the Government will keep the prices of new Housing Board flats in check, it has less control over prices in the resale market.

This state of affairs was highlighted by Prime Minister Lee Hsien Loong last night when he commented for the first time on what has been one of the hottest topics of discussion.

Speaking at a gala dinner to mark the HDB's 50th anniversary, Mr Lee stressed the Government was committed to keeping HDB flats affordable and that its new flats are priced within the means of the vast majority of Singaporeans.

On top of that, it would also build enough new flats to cater to demand as the population grows. In fact, to cap its 50th year, the HDB will build its one millionth flat this year.

However, the Government does not have control over the prices of resale flats, he said.

His explanation: 'These resale prices are set by individual households who transact flats on a willing buyer, willing seller basis, and are affected by movements and sentiments in the wider economy, including the private property market.

'Hence, resale prices of HDB flats will fluctuate from year to year.'

Despite these short-term fluctuations, Mr Lee said these flats would still hold their value in the long run.

'Over the long term, the value of HDB flats depends on the strength of the Singapore economy. Provided Singapore continues to do well, our flats will maintain their value, and Singaporeans can enjoy an appreciating asset,' he said.

The affordability of resale HDB flats has been in the spotlight, following a slew of reports showing a surge in prices.

Latest HDB data show resale prices rising 3.9 per cent in the final three months of last year to hit a fresh record, bringing the full-year increase to 8.2 per cent.

Similarly, the median Cash-over-Valuation (COV) paid for HDB flats in that period was $24,000 - double the $12,000 median in the third quarter last year. COV refers to the cash a buyer pays over and above a flat's valuation.

Price discussions aside, Mr Lee, in his address, looked back at the 50-year history of the HDB, starting from 1960 when it was formed to tackle Singapore's housing crisis to the present day when it is the provider of quality housing to most Singaporeans.

As he reflected on its successes, he threw up an interesting poser: Given that the entire population is housed, and the HDB has fulfilled its original mission, does it still have a role to play?

He explained that the HDB would remain relevant because it performs a crucial dual role: a housing and a social role.

'It is both a matter of capability - who can build, plan and manage these estates - and also a matter of social policy.

'Nobody else but the Government can build houses not just to achieve a housing objective, but to achieve a social goal - racial integration, community bonding, establishing and upgrading and maintaining a high quality living environment for the whole community,' he said.

But the environment the HDB is working in now has changed, as with the expectations of the people, he said.

'Singaporeans' aspirations have risen sharply. Finding a roof over our heads is no longer the pressing requirement. The HDB flat is not just a shelter, but also a key investment asset,' he noted.

So, when people look for a flat now, many more considerations are involved, he said: 'They want the right flat, in the right locality, at the right time and at the right price. Such high expectations are understandable, since buying a flat is a major commitment for a young couple setting up a home together.'

He stressed the HDB is committed to providing Singaporeans with high quality public housing, although it cannot accommodate every preference and meet every expectation.

The gala dinner also launched the International Housing Conference, which will run till Friday. Some 500 local and foreign delegates, as well as housing experts, are here to discuss such housing issues as urban planning and environmental sustainability.