HDB quota for PRs may not avoid enclaves 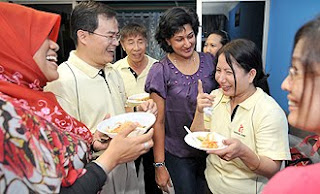 LAST December, MP Lim Wee Kiak saw a notice pasted illegally on a wall in his Canberra ward of Sembawang GRC. It was written entirely in the Myanmar language.

Curious, he got it translated. The notice was from a real estate agent offering his services solely to Myanmar permanent residents (PRs) looking for flats here.

Dr Lim was disturbed as he saw this as a tell-tale sign that ethnic congregation of foreigners was beginning in HDB estates.

Such concerns are evidently shared by the Government.

The HDB disclosed on Wednesday that it was considering introducing a separate ethnic quota for PRs to prevent enclaves from forming in estates.

Earlier, Minister Mentor Lee Kuan Yew said at a dialogue that the Government did not want to see new citizens congregate and would disperse them across HDB estates.

Recognition of this as an issue was welcomed by seven MPs who were contacted yesterday about the situation in their wards, and for their views on how such a quota could be implemented.

The HDB has not provided details of what the changes might entail.

But several MPs did point out yesterday that it was through renting of flats in the same areas - and not necessarily buying flats - that PRs have also been able to congregate.

Latest available data showed that as of June last year, only 4.9 per cent of HDB flats were owned by PRs.

Hence, a quota imposed on home-buying by PRs might make little difference.

The Ethnic Integration Policy (EIP), introduced in 1989, aims to maintain a healthy racial mix in housing estates by stipulating maximum proportions for the key ethnic groups.

But MP Charles Chong, whose Punggol Central ward, like all new estates, has seen an influx of foreigners, said the EIP now is too porous for a new generation of PRs.

If there are no sub-divisions, there could arise an enclave, say of Bangladeshis, all staying in the same block or precinct, he pointed out.

The same goes for mainland Chinese, Taiwanese or Chinese-Indonesians, who are all classified under 'Chinese'.

Dr Lim argued, however, that the important distinction to make is not within ethnic classifications, but between Singaporeans and PRs. He said there are some floors of HDB blocks in his ward where more than half the residents are foreign.

They are a mix of nationalities. So although there is no 'ethnic' enclave as such, there is a high concentration of foreigners 'to the point where Singaporeans feel threatened and become a minority'.

When that happens, then it becomes an issue, he said.

MP Ho Geok Choo - who recalled a visitor describing her Boon Lay ward as being so cosmopolitan that it felt like being overseas - said a quota would help dampen excessive property prices. This would make it more difficult for PRs to artificially inflate prices in certain areas by all snapping up flats there, she said.

It would also assuage the concern of those Singaporeans who feel besieged in their neighbourhood by new sights and smells. On her house visits, every block throws up at least two or three Singaporeans who voice their concerns about this, she said.

But ultimately, a quota on home-buying may not make much of a difference.

Jurong GRC MP Halimah Yacob said more than 70 per cent of foreigners in her Bukit Batok East ward are renting. They rent in the area as it is close to their workplaces in the West.

While it is possible to envision an ethnic enclave of renters, 'there's nothing you can do (about where PRs rent)', she said. The rental market is left entirely to free market forces.

Regardless, director of Dennis Wee Properties, Mr Chris Koh, foresees a big plus if a new quota is implemented: It would puncture the belief that some Singaporeans have that their flats can fetch a higher price if they sell them to PRs.

Sellers who hear that a certain nationality is prominent in the neighbourhood pressure agents to find such buyers, thinking it will mean more profits, he said.

'If quotas are set... we can tell them, 'We hit the quota max already and we have to be realistic about the price.''