Resale prices hit record, with the HDB resale price index rising to 150.8 points, up 3.9% from the previous quarter

CASH is king, and this adage rang particularly true in the public housing market in Q4 2009, when the cash premium for Housing & Development Board (HDB) flats doubled from the previous quarter. 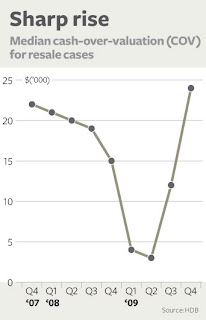 On the back of a strong housing market, HDB will be pushing out 6,900 flats in H1 2010, spread across areas such as Sengkang, Sembawang, Punggol, Yishun and Jurong West. There will also be monthly launches of build-to-order (BTO) flats for the next few months.

The sharp rise in COV, or the amount of cash buyers pay above flats’ valuations, caught the attention of several industry watchers. COVs indicate that buyers see greater worth in the flats than professional valuers do, and this happens especially in a rising market. In Q4, 93 per cent of resale deals occurred above valuation, compared with 79 per cent in Q3.

Most observers attributed the high COVs to strong demand for flats, while supply remains limited. C&H Realty managing director Albert Lu believes there could have been some panic buying as well.

HDB prices have risen in the last few quarters and with the economy expected to pick up this year, some home seekers could fear further price hikes, he said. ‘That might have prompted them to say ‘hey, better buy before prices go up again’.’

The good news for buyers is that COVs are unlikely to continue their steep rise, according to property consultants. HDB revealed that for the first half of this month, the median COV for all resale transactions has dipped slightly to $22,000.

‘With the resale HDB market trading at such high COVs, many buyers have become resistant and are exploring other options,’ said ERA Asia Pacific associate director Eugene Lim. Some are thinking of buying smaller flats, delaying their purchases or joining the queue for new flats.

He believes that COVs will continue inching up this year, though at a slower pace because ‘we are not in very positive economic waters yet’. PropNex Realty CEO Mohamed Ismail does not expect the overall median COV to exceed $30,000 this year.

Consultants are projecting HDB resale price growth of 5-10 per cent this year. In Q4, the median resale price of executive flats was $485,000 – those in Queenstown even achieved an eye-popping median price of $800,000.

Last quarters of the year tend to be quieter, and rising valuations and COVs could have contributed to the fall, Mr Ismail explained. ‘Furthermore, the steady launch of new BTO projects, the government’s continued assurance of more BTO projects in the pipeline and the increased chances for first-time buyers of BTO flats have all helped to assuage demand.’

HDB recently offered 1,300 flats from two BTO projects in Choa Chu Kang and Hougang and the flats drew a flood of applications. It also launched the tender of two executive condominium sites in Sengkang and Yishun which could yield about 900 units together.