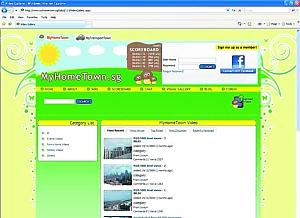 IT MIGHT have been where old folk played chess, tended to vegetable patches or pet birds, or just gossiped.

But HDB void decks of today are anything but breezy, and more geared towards the techie.

With videos, photos and live updates, they have evolved into online forums addressing everything from suitable wallpaper to leaky toilets - and are as much about being utilitarian as they are about fulfilling a social function.

My generation does not even know we can donate old-but-still-working furniture to the residents' corner, let alone the people who might sit there.

But HDB 'social networking' sites - created by and for young heartland residents - are entirely new creatures, portals where youths are anything but apathetic.


Given the right setting, they are heralding a revival of buzzing community life in residential estates. (Never mind that they are generally the first to avoid traditional community activities deemed 'uncool' or only for the old.)

There are at least 10 such sites - apart from dozens of Facebook and Twitter accounts - ranging from the more popular such as Punggol.org to the quirkier MyHomeTown.sg

Like other social networks, these sites have photos, videos, forums and information for residents of a particular town. Punggol and Pinnacle@Duxton, for instance, have scores of young residents in their 20s and 30s among their members.

They befriend one another there, in a whole new kampung experience. It is something my parents' generation might have missed out, having had to move from smaller settlements into high-rise apartments, whose dwellers barely glimpsed at one another before slamming their doors shut.

Online, a new breed of neighbours are friendlier than their closed doors suggest. Punggol.sg noted: 'In towns, like Punggol which is densely populated, it is much more difficult to be friendly to people you see on the streets.'

Yet online, people chat about the latest developments even before they move in, grouse about defects or trade decorating tips. They even know who is living in which unit.

They bond quickly too, because it is speedier to get information or alerts out to a large mass of people.

Spotted a dodgy fellow loitering at the lift lobby for several days? Send out an immediate warning on the forum.

Want to know how your new flat is progressing? Log on to see other people's photos.

The new Pinnacle@Duxton residents have even banded together online to generate debate over the lack of security in certain areas.

In an instant, neighbours become friends, something that in the offline world took people years to do.

The virtual void deck is as much a part of life to young people today as the older, physical model is to seniors.

The downside, of course, is that an iconic Singapore scene - that of residents relaxing at void decks - is disappearing.

But even if we lose a physical piece of our heartland culture, it is heartwarming to see that some things survive, even flourish, in virtual form.